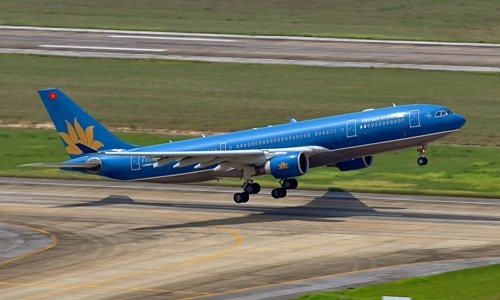 Due to the approaching Typhoon Hagibis, Vietnam Airlines cancels or adjusts many flights scheduled to depart to Japanese cities on Saturday. Photo by Shutterstock/annguyen.

Vietnam Airlines has delayed at least 10 flights to Japan by over 20 hours as typhoon Hagibis comes close to making landfall around Tokyo.

The national flag carrier said Friday that ten flights scheduled to leave HCMC and Hanoi for Japanese cities like Osaka, Nagoya and Tokyo on Saturday will have their departure delayed by 22 hours on safety considerations.

In addition, the airline announced the cancelation of four flights, including two from Da Nang to Osaka and two from HCMC to Tokyo. Those affected by flight cancelations on Saturday will be given seats on Sunday flights.

It advised passengers to stay updated on the status of their flights as well as on weather conditions.

As of Friday, the center of the storm Hagibis was around 400 kilometers (250 miles) west of Chichijima, in the Ogasawara Islands, and was moving north-northwest at 25 kph (15 mph), Japan Times reported.

The storm is expected to carry gusts of 216 kilometers per hour when it makes landfall late Saturday, according to AFP.

Local authorities are also on alert for possible flooding because the storm could make landfall at the same time as high tide in Tokyo Bay. Prime Minister Shinzo Abe has requested his cabinet to take all measures to prepare for the typhoon.

The storm is expected to disturb weekend holiday traffic, with many forced to cancel travel plans.