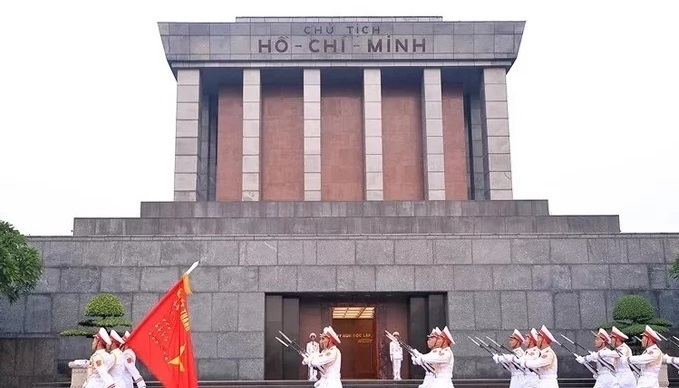 Guards march in front of the Ho Chi Minh Mausoleum in Hanoi. Photo by VnExpress/Giang Huy.

Scientists who have examined President Ho Chi Minh’s embalmed body at his mausoleum in Hanoi say it’s in ‘excellent condition.’

The examination lasted from July 12 to 18, said Dang Vu Minh, president of the Vietnam Union of Science and Technology Associations (VUSTA) and president of the Medical and Science Council, which was formed last month with four Russian experts and seven Vietnamese.

At a meeting on Thursday, Prime Minister Nguyen Xuan Phuc asked the Russian scientists to continue cooperating with the management board of the Ho Chi Minh mausoleum to preserve his body.

The country should continue to improve methods to examine and preserve the embalmed body, said Victor Vasilievich, a Russian science professor.

Vietnam is among several countries that have embalmed their leaders’ bodies, including Russia, China, and North Korea. The founder of the Soviet State, Vladimir Lenin, was embalmed and placed in the Moscow Mausoleum in 1924, according to the museum’s website.

President Ho Chi Minh died on September 3, 1969. In the following days, his body was embalmed by Soviet Union experts and a special Vietnamese medical team under a joint agreement between the two governments. His body is placed in a glass coffin at a mausoleum named after him in Hanoi. Thousands visit the site annually.

The Vietnamese government then negotiated with Russia to move to Vietnam the production of a chemical mixture needed for the preservation. The Russian scientists had kept the formula to themselves in the early days. It was only in 2004 that they agreed to produce the cocktail in Vietnam, which was also when Vietnam officially adopted the technology, Kiem said.