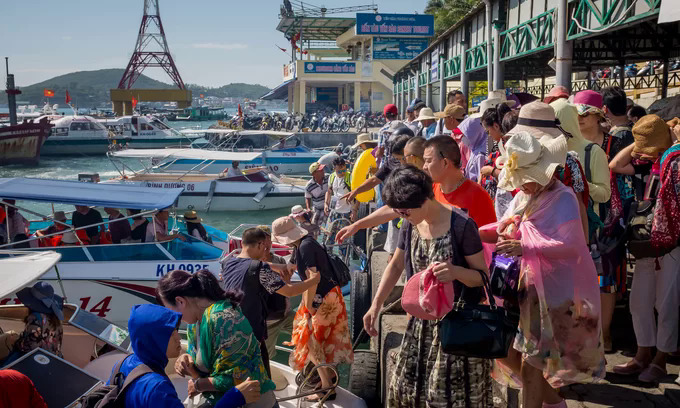 Chinese tourists enter boats to get to islands in the central resort town of Nha Trang from Cau Da Port. Photo by AFP/Linh Pham.

The private low-cost airline will operate a once-weekly return flight on Fridays using an Airbus A321 aircraft, but has yet to announce when the maiden flight will take off.

Yinchuan, capital of the Ningxia Hui Autonomous Region, has beautiful landscapes and over 60 historical sites including mosques, pagodas, pavilions, temples, and imperial tombs. Its most popular attractions are Helan Mountain, Sand Lake and the Shapotou tourist district.

Nha Trang in the central province of Khanh Hoa is very popular with Chinese tourists for its long sandy beaches and little-known islands along the coast.

The town ranked third among Southeast Asian beach destinations for Chinese tourists in 2018, behind only Indonesia’s Bali and Thailand’s Phuket, according to a report by China’s Ministry of Culture and Tourism.

In 2018 Nha Trang received more than 1.4 million Chinese visitors, a 56 percent rise from the previous year and accounting for more than half of all international arrivals to the town.

China has been Vietnam’s biggest source of tourists in recent years, making up a third of all foreign visitors.

Vietnam allows Chinese nationals to visit Ha Long Bay, a UNESCO heritage site in the northern province of Quang Ninh, for up to three days with just their identity cards, and to apply for visas online.

A Bloomberg report said Chinese tourists could have a significant impact on Vietnam’s economy, claiming a 30 percent increase in spending by Chinese tourists would boost its growth by nearly 1 percentage point.

“Chinese tourism is pretty big for ASEAN now, and all the countries rely on Chinese visitors to keep coming and keep spending,” Edward Lee, an economist at Standard Chartered Bank Singapore, was quoted as saying in the report.