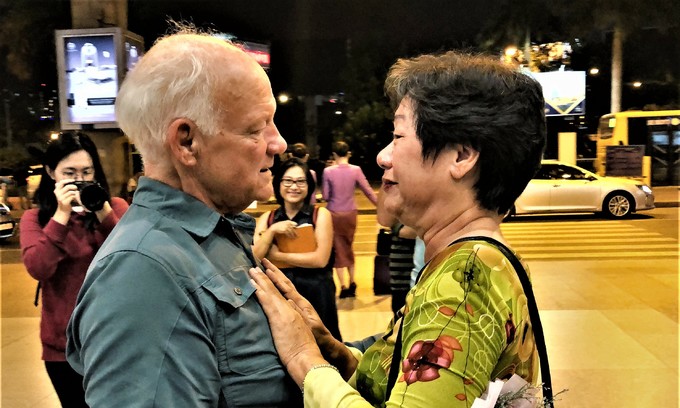 September 12 was a special day for Lan as she went to the airport to meet the man she loved 50 years ago.

It was almost 10 p.m. when she reached Ho Chi Minh City’s Tan Son Nhat International Airport with her family.

While the family members were waiting at the arrival gate, Lan insisted on standing at Pillar 12.

“I am excited and also nervous,” the 67-year-old woman said, waiting restlessly for Ken Reesing, an American veteran she had fallen in love.

Two months ago Ken told her that he wanted to visit Vietnam. “I did not want him to come to Vietnam alone. It is too far. I have a sister in the U.S and she will come to see me in Lunar New Year, I told him to delay the plan until then so he can travel with my sister,” Lan says. “But he did not listen to me, he always wanted to go.”

Lan got divorced several years ago, and now is living in southern Dong Nai Province with her daughter and managing a food store.

An hour after the flight landed, the veteran did not show up. At Pillar 12 in front of the airport, she started to feel butterflies in her stomach.

He was in a green shirt, similar to the one he wore in a picture taken 50 years ago. He immediately looked for Pillar 12. After an 8,800-mile journey from Ohio, the 71-year-old man was tired, but smiled when he saw Lan, who was in an ao dai.

Seeing Ken walk toward her with a bunch of roses, Lan held out her arms. They both burst into tears.

The couple spent minutes hugging each other and whispering.

“The first thing I said to her was my apology. I could not keep my promise to come back earlier,” Ken says. “I am wearing this shirt because it looks like the shirt I wore in the photo so that she can recognize me.”

Talking about the trip, he says it is a miracle and a dream. This is his second time in Vietnam. The first was in 1969.

Ken will stay in Lan’s house in Dong Nai, spend time with her family and friends before returning to the U.S. at the end of September. The man with a failing marriage now is living in Ohio.

Lan says she had never used a smartphone before until they started calling each other daily.

“It took me a few days to get used to speaking in English with him on the phone,” she says. “I have not spoken English for long.”

The couple say, holding hands and shedding tears: “We do not want to push anything. We will let things happen naturally.”

One has to be stone-hearted not to wish they walk back into each other’s lives.

Lan had first met Ken Reesing in 1969 in a bar near Long Binh Post, a former U.S. Army Base in Dong Nai, when he served as a soldier in the Vietnam War.

He would usually walk to EM Club (Enlisted Men’s Club) to drink and listen to music in the evening. The 22-year-old soldier met Lan, a bar hostess, and fell for her at first sight.

Ken was told he would leave Vietnam in September 1969. He asked Lan if she wanted to go to the U.S. with him, but she refused. She did not want to leave her family.

One day before he left Vietnam the two went to a post office, bought 50 envelopes and put them in a box. He told her that when he got the 50th letter from her, he would return to Vietnam.

He thought it would take her a year to write the 50 letters, but it took her less than three months. And then she kept writing.

Ken could not come back as promised.

When the war was over Ken wrote several letters to the EM Club and Long Binh Post, but received no reply. He never stopped trying to find Lan.

But it was not fated to happen until June 2019.

Robert Frank, a foreign man living in Ho Chi Minh City, approached Reesing after knowing that he was looking for a Vietnamese woman. Reesing agreed to send Frank some photos of Lan he had.

Frank posted the information on social networks and found Lan within a day. Both Ken and Lan were confused at first. But when they spoke with each other, the memories of their love came flooding back.

They knew their dreams had finally come true.