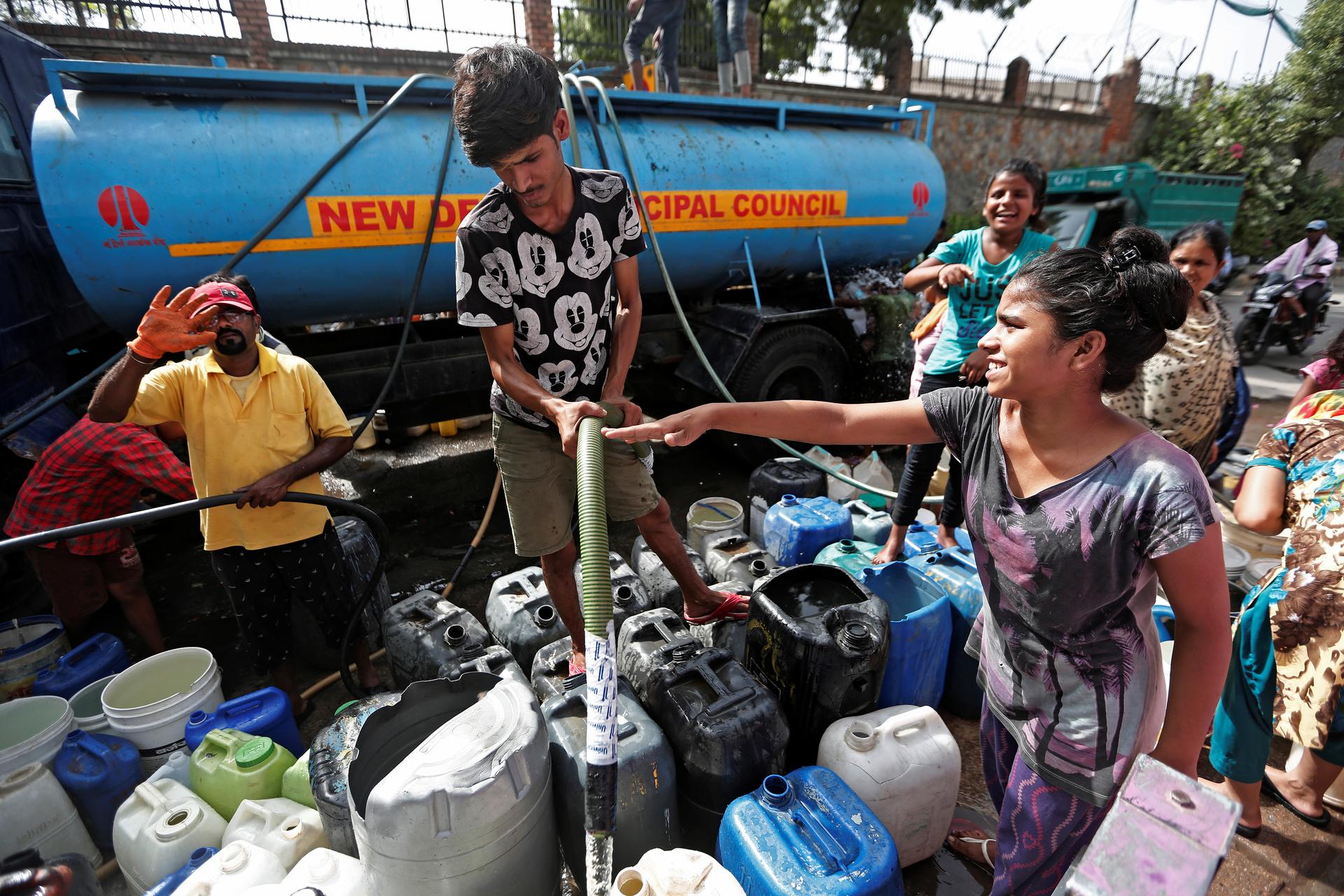 NEW DELHI — In this teeming capital city of more than 20 million people, a worsening drought is amplifying the vast inequality between India’s rich and poor.

The politicians, civil servants and corporate lobbyists who live in substantial houses and apartments in central Delhi pay very little to get limitless supplies of piped water – whether for their bathrooms, kitchens or to wash the car, dog, or spray a manicured lawn. They can do all that for as little as $10-$15 a month.

But step into one of the slum areas in the inner city, or a giant disorganized housing estate on the outskirts and there is a daily struggle to get and pay for very limited supplies of water, which is delivered by tanker rather than pipe. And the price is soaring as supplies are fast depleting.

India’s water crisis is far from even-handed – the elite in Delhi and most other parts of the country remain unaffected while the poor scramble for supplies every day. Prime Minister Narendra Modi’s official residence and those of his cabinet are in central Delhi, as are those of most lawmakers.

That may help to explain why it took until this week for Modi to call for a massive water conservation program, the first big initiative by the government despite years of warnings about dry reservoirs and depleted water tables, policy makers and water industry experts said.

Telecom sales representative Amar Nath Shukla, who lives in a giant unauthorized housing sprawl on the south side of Delhi, says he is now paying 700 rupees ($10) for a small tanker to bring him, his wife and three school-age children 2,000 liters of water, their weekly quota.

A year ago, Shukla would buy two of the rusty, oval-shaped tankers a week for 500 rupees each but he cut back to one as the price climbed 40 percent.

“Why should a densely populated settlement get so little of water and why should the sparsely-populated central district of New Delhi receive so much of extra supply?” asked Shukla.

More than 30 other residents Reuters spoke to in his Sangam Vihar district also complained about the quality of water.

“Until last year I was drinking the water sold by a few local suppliers but then I fell ill and the doctor asked me to buy water bottles made by only big, reputed companies,” said Dilip Kumar Kamath, 46, waving a prescription which listed abdominal pain and stomach infection as his ailments.

Delhi’s main government district and the army cantonment areas get about 375 liters of water per person per day but residents of Sangam Vihar on average receive only 40 liters for each resident per day. The water comes from boreholes and tankers under the jurisdiction of the Delhi water board, run by the city government.

But residents say some of the boreholes have been taken over by private operators associated with criminal gangs and local politicians. These gangs also have a major role in providing private tankers, which are all illegal, making people liable to price gouging.

And all this when temperatures, and demand, are soaring. Delhi was the second driest it has been in 26 years in June, and recorded its highest ever temperature for the month at 48 degrees Celsius on June 10.

Monsoon rains reached the capital on Thursday, more than a week later than usual, with only a light drizzle.

In Delhi, nearly half of the supply from the Delhi water board either gets stolen with the connivance of lowly officials or simply seeps out via leaky pipes, several studies show.

The board’s 1,033 tanker fleet is well short of the city’s requirements. Hundreds of private water tankers are operating this summer, though there are no official numbers.

The water scarcity is even more acute in the Bhalswa Dairy locality of northwestern Delhi, more than 30 km (20 miles) from Sangam Vihar. The water from a couple of community taps and hand pumps are too toxic to use, forcing people to queue up for a government tanker that comes just once a day.

As a result, fights frequently break out when people, mostly can-carrying women and children, sprint towards the arriving tanker. Last year, at least three people were killed in scuffles that broke out over water in Delhi.

“Fights over water supplies have gone up since May and these fights now constitute almost 50% of our daily complaints,” said a police official at the Bhalswa Dairy Police station, who declined to be named.

Some tanker operators have also started selling bottled water, underlining concerns over the quality of water in their tanks and how costs for ordinary people can mount, said the police official.

Nearly 200,000 people living in the Bhalswa area are vulnerable to liver-related disease such as jaundice and hepatitis, said Kamlesh Bharti, president of non-governmental organization Kamakhya Lok Sewa Samiti, which works in the areas of health and education.

The Bhalswa area is next to a big waste landfill, which has contaminated both surface and groundwater in the area.

According to UK-based charity WaterAid, about 163 million people in India, roughly 12 percent of the population, do not have access to clean water close to their homes, the most of any country.

Almost all middle-class residents in the city have either water purifiers at home or they buy big cans of water from Bisleri, India’s top bottled water brand, Coca-Cola Co or PepsiCo Inc.

Bottled water suppliers reported a nearly three-fold jump in sales in India between 2012 and 2017, according to market research company Euromonitor.

India’s dependence on groundwater and the country’s failure to replenish aquifers have exacerbated the crisis, said V.K. Madhavan chief executive of WaterAid.

Both individual households and myriad industries mostly use fresh water and the reuse and recycling of water “is almost an alien concept” in the country, Madhavan said.

Still, Delhi authorities said the plan to build three dams in the upper reaches of the Yamuna river, which passes through the city, would help Delhi overcome the shortage.

It will take 3-4 years to construct them, said S. K. Haldar, a top official of the Central Water Commission.

But issues such as land acquisition, resettlement and environmental clearances could make such an aggressive timetable untenable, Madhavan said.