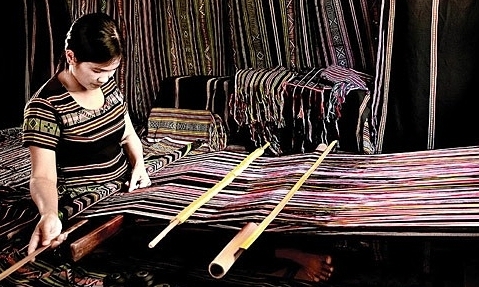 Traditional brocade weaving by the H’re ethnic minority community has been officially recognized as a national intangible cultural heritage.

The recognition was conferred by the Ministry of Culture, Sports and Tourism after the craft was deemed to have met criteria related to reflecting local cultural identity, diversity and human creativity passed through the generations, local authorities announced Friday.

Traditional brocade products including men’s clothing, head gears, blankets, baby carriers and bags made by ethnic minorities have become increasingly popular within the country and abroad, helping preserve traditional culture and improving incomes for weavers and other craftspersons.

Teng Village in Quang Ngai Province’s Ba To District is the only one in the central province that still retains the age-old craft of H’Re brocade weaving.

According to village elders, for centuries, Teng villagers have made brocade from scratch, from growing cotton, to threading them, weaving fabric and making clothing and other products.

Over 90 percent of the country’s H’Re ethnic minority population of roughly 116,000 is concentrated in Quang Ngai, provincial data shows. H’Re people account for 84 percent of Ba To District’s population.

Quang Ngai’s Ba To Museum offers a glimpse into the H’Re people’s lifestyle with hundreds of traditional items on display, including objects of worship and daily life tools.

Vietnam has 54 ethnic communities with the Kinh accounting for 86 percent of the 94-million population. 75 percent of 53 ethnic minority communities live in the northern mountainous and Central Highland regions.