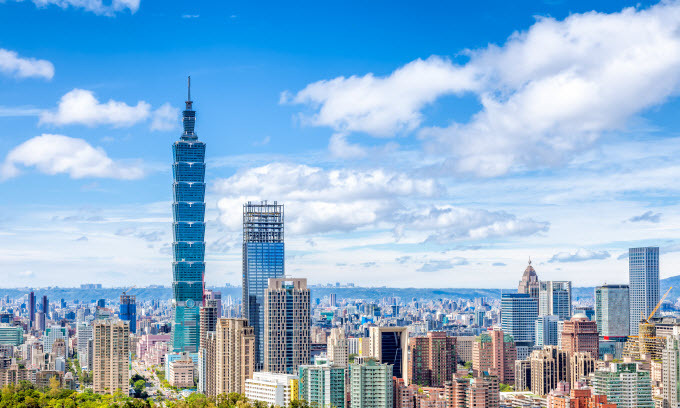 An aerial view of Taipei in Taiwan. Photo by Shutterstock/Dong Khoa.

The Vietnamese airline has also announced that it will use Airbus A320/A321 aircraft for the flights, which take around three hours.

Taipei, a political, economic, and cultural center of Taiwan, was ranked the fifth leading emerging city in the world by a study carried out in 2017 by Chicago-based real estate services firm Jones Lang LaSalle.

The new route is part of Vietjet’s plan to expand its flight network and provide more traveling opportunities for Vietnamese and Taiwanese residents, Jay Lingeswara, the carrier’s international sales and distribution director, said in a press release.

Da Nang has become a top travel choice of Taiwanese visitors. Last year, the central coastal city, home to the beautiful My Khe Beach and a neighbor of the UNESCO heritage site of Hoi An, welcomed 36,400 tourists from Taiwan, up 30 percent from 2017, according to the city tourism department.

The number of foreigners arriving in Da Nang in January-July was 1.9 million, up 11.2 percent year-on-year, with some of the biggest source markets including Taiwan, Germany, India, Malaysia and France posting big growth. The number of visitors from Taiwan increased by 86 percent.

Earlier this year, the New York Times ranked Da Nang among 52 best places to go in 2019, dubbing it “the Miami of Vietnam.”