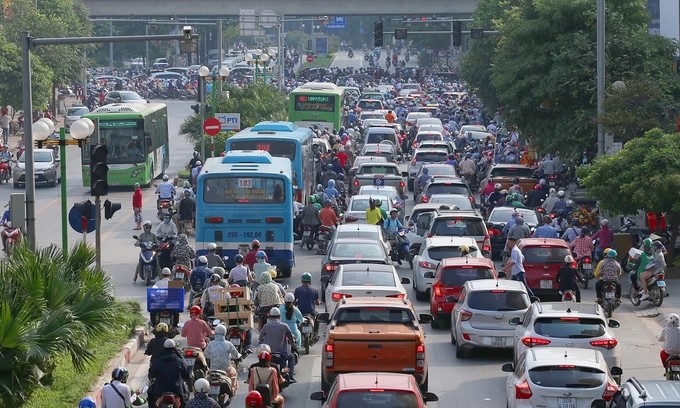 Public buses are stuck in traffic on To Huu Street, Hanoi, September 25, 2019. Photo by VnExpress/Tat Dinh.

Giving exclusive spaces to public buses might not be necessary but they must have priority during rush hours, a top Hanoi transport official says.

Nguyen Hoang Hai, director of the Hanoi Urban Transport Management and Operation Center, told VnExpress: “It would be ideal if the lanes could be earmarked exclusively for buses 100 percent of the time, but I don’t think it’s necessary. We are considering reserving the lanes by the hour and only in certain places.”

Hai was referring to the proposal to create bus-only lanes to increase the rate of commuters using public transport to 25 percent by 2020.

“If traffic is not too heavy, vehicles can share the lane. But buses must get priority during rush hour.”

While public transport is cheap and could carry a large number of passengers, it could interfere with other vehicles on the road, like when buses have to stop at bus stops to pick up passengers, he said.

“When there are exclusive bus lanes, picking up and letting off passengers would cause no interference.”

To determine which lanes would be chosen, the city transport department would need to analyze the infrastructure and vehicle density, Hai said.

Asked about some people’s doubts whether exclusive bus lanes would work since rapid transit buses (BRT) occasionally get stuck in their own exclusive lanes, Hai blamed the BRT problem on poor management and lack of clear regulations.

But BRT is faster and less likely to see accidents, he pointed out.

“I believe that exclusive bus lanes are necessary. The return on investment depends on the transport and other sectors’ management and, especially, the public’s attitude.”

Asked about some people saying it might be hasty to have exclusive bus lanes by 2020 since the city’s infrastructure would be incapable of supporting them, leading to more traffic congestion, Hai said with much analysis still to be done it is too early to make such a claim.

“Hanoi’s traffic [plans are] being completed step by step, and the city will not designate bus lanes indiscriminately. We will only choose roads with high bus density and traffic needs.”

The right time to do so would be after the Cat Linh-Ha Dong railroad begins operation, he said. With exclusive bus lanes, buses would integrate well with railway stations, and users would be pleased, he added.

“If we leave the situation as it is… we would never be able to eliminate traffic congestion in the city.”

Hanoi needs to determine the efficacy of exclusive bus lanes before actually creating them, Ho Quoc Chinh, a transport lecturer of the University of Sydney, has said.

For this, a set of concrete performance indicators needs to be created to determine the effectiveness of a bus system before deploying it, Chinh said.

The city currently has only one lane reserved for public buses, between Long Bien bus station and the intersection of Thanh Nien, Nghi Tam and Yen Phu streets, and a bus rapid transit route between Kim Ma in Ba Dinh District and Yen Nghia in Ha Dong District.

Hanoi’s 2,000 buses carry around 1.2 million passengers every day, accounting for 12 percent of all commuters.