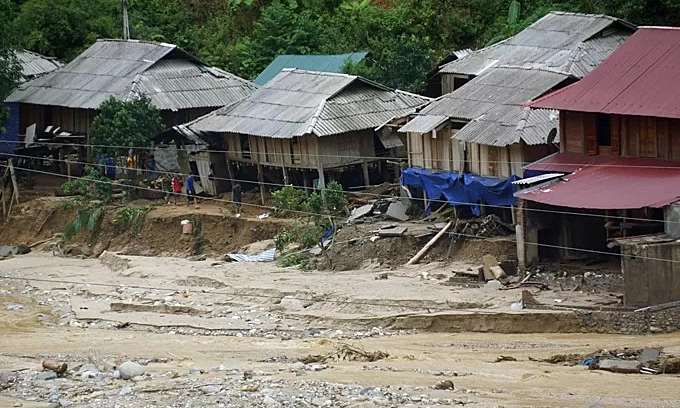 A village in the north central province of Thanh Hoa is damaged as storm Wipha hit on August 3, 2019. Photo by VnExpress/Le Hoang.

Storm Podul is expected to hit provinces from Nghe An to Quang Binh with strong winds and heavy rains on Friday morning.

As of Thursday afternoon, Podul’s eye was to the south of China’s Hainan Island, and is about 350 kilometers to the east of Vietnamese shores from Nghe An to Quang Tri provinces, according to the National Center for Hydro-Meteorological Forecasting.

It was carrying maximum wind speeds of 75-90 kph, the center added.

Podul is expected to make landfall with wind speeds of 60-75kph. It would devolve into a tropical depression within the next 36 to 48 hours, the center said.

Heavy rains should be expected across the country.

Central provinces of Thanh Hoa, Nghe An, Ha Tinh, Quang Binh, Quang Tri and Thua Thien-Hue, which is home to the popular tourist town Hue, should expect rainfall of up to 200 mm a day until Saturday. Rainfall of 180 mm a day is considered heavy.

Da Nang, the largest city in central Vietnam, is forecast to receive rainfall of 100-200mm from Friday to Saturday.

Hoa Binh, Son La, Yen Bai and Phu Tho Province in northern Vietnam should expect between 200-300mm of rainfall until Monday, and the nearby Hanoi between 50-120 mm.

Rainfall of between 100-150 mm is forecast in southern Vietnam, including Ho Chi Minh City, until Sunday, and 150-250 mm in the Central Highlands, home to Da Lat.

Hong Kong Observatory and the U.S. Navy forecast that the storm will make landfall at around 7 a.m.

U.S. weather forecasting service AccuWeather said Podul is expected to maintain its tropical storm intensity when it makes landfall before weakening into a depression over the rugged terrain of Vietnam, Laos and Thailand.

Areas from Da Nang to Ha Tinh would endure the worst of the storm’s impacts with strong winds and torrential rainfall from Thursday to Friday, it added.

Numerous localities, including Quang Binh, Thanh Hoa, Thua Thien-Hue and Kien Giang, home to Phu Quoc Island, have banned their ships and boats from sailing on Thursday as the storm approaches.

As many as 13 flights between Hanoi, Saigon, Hue, Thanh Hoa’s Vinh and Quang Binh’s Dong Hoi by carriers Vietnam Airlines, JetStar Pacific and Vasco will be cancelled Thursday, a press release by the Vietnam Airlines Group said.

Earlier this month Vietnam was struck by storm Wipha, which brought heavy rains, floods and landslides that left at least 10 dead and 11 missing in Thanh Hoa Province and its neighbors.

The country is hit by up to 10 tropical storms during the monsoon season between July and October. Four are expected this year.