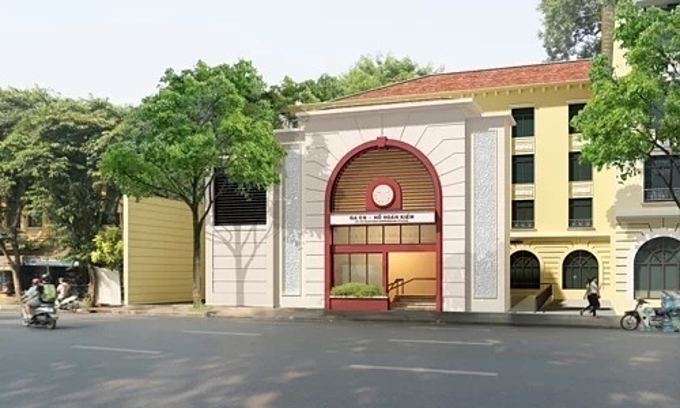 An illustration of the C9 metro station planned near the Hoan Kiem Lake in Hanoi. Photo courtesy of the Hanoi Metropolitan Railway Management Board.

The culture ministry has cautioned that a metro station planned near Hanoi’s iconic Hoan Kiem Lake could violate the nation’s Cultural Heritage Law.

C9, the station, should be constructed out of the protected area of Hoan Kiem Lake relics, the Ministry of Culture, Sports and Tourism has advised Hanoi authorities in a document sent Thursday.

The ministry maintains that the station’s location in the current plan, which is just 36 meters away from the Thap But (Pen Tower) and a meter deep from the ground level, would make construction difficult.

Digging the ground, putting up fences and felling all the existing trees will affect the ecosystem and scenery around the lake, it said.

The ministry advises that the Hanoi administration amends plans for metro lines, stations and other related constructions in ways that the Law on Cultural Heritage is not violated.

The Hanoi People’s Committee had said in a recent report to Prime Minister Nguyen Xuan Phuc that the station’s intended location is ideal as it would stand on the widest area near the lake without indentation risk during construction.

The Ministry of Culture, Sports and Tourism had last year requested that the station be away from the Hoan Kiem Lake, as the lake was a historical and cultural landmark, requiring “a balance between conservation and development.”

However, the Hanoi administration has rejected all proposed alternatives on the grounds that any plan involving areas other than the originally intended location would require the station’s numerous components, including its entrance, exit, tunnels and additional structures, to be moved as well.

The urban metro project would be 11.5 kilometers long, including nine kilometers underground. It would run from the Ciputra Hanoi International City in Tay Ho and Bac Tu Liem Districts to an intersection between Pho Hue and Nguyen Du Streets in Hai Ba Trung District.