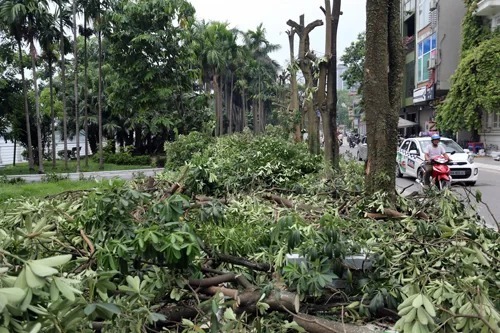 Milk flower trees near the West Lake of Hanoi are trimmed to be moved to the Nam Son Landfill on the outskirts, July 2019. Photo by VnExpress/Tat Dinh.

Hanoi plans to relocate 108 milk flower trees from near the West Lake to the outlying Soc Son District because of their overpowering fragrance.

Forty were moved from Trich Sai Street in Tay Ho District on Thursday, and the rest will be moved this weekend. All are over a decade old.

The public has been complaining that the trees produced too much fragrance and their roots affected the roads and pavements around them, Hoang Thanh Hai, chairman of the Buoi Ward People’s Council, said.

“We are considering planting other trees in their place.”

The trees will be moved to around the Nam Son landfill, with some officials hoping they would help reduce the stink from the trash there. The 157-hectare (390-acre) landfill, built in 1999, receives almost 5,000 tons of garbage daily, according to the Hanoi Urban Environment Company.

Hanoi has around 6,000 milk flower or blackboard trees. Authorities plan to relocate more trees in future to distribute them more evenly throughout the city.