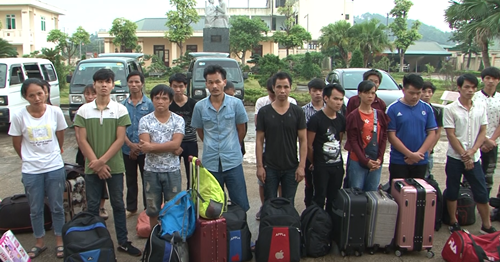 Chinese authorities have detained and sent back 30 Vietnamese nationals working in the country without valid papers.

The Vietnamese workers said they had entered China through several border trails to find jobs because they could not find stable work at home.

They mostly came from northern mountainous provinces Lang Son, Cao Bang, Ha Giang, Lai Chau, Tuyen Quang and Thai Nguyen, which are at or near the China border, and from the central provinces of Thanh Hoa and Quang Binh.

They were detained by Chinese police for failing to show valid work permits or personal identification papers.

On Wednesday, border officers in China’s Guangxi Province handed over the group of Vietnamese workers to Vietnamese authorities at the Chi Ma border gate in Lang Son.

Officers from the Lang Son immigration department said Saturday that they had cooperated with relevant agencies to take the illegal workers back home.

In recent years the number of Vietnamese going to China illegally to work, mainly from northern provinces, has remained high. Last year more than 35,000 were caught trying to enter illegally.