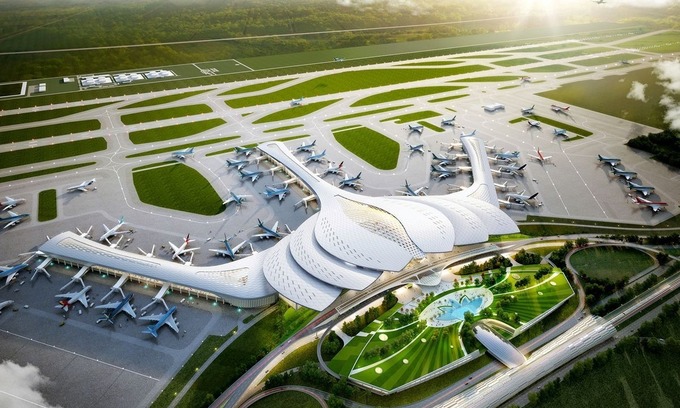 An artist’s impression of the Long Thanh International Airport in the southern Dong Nai Province. Photo courtesy of the Airports Corporation of Vietnam.

Vietnam should invite bids for building its largest airport to allow competition instead of handing it to a state-owned firm, several experts say.

Economist Le Dang Doanh said a public bidding process is the most suitable funding option for the Long Thanh International Airport as it would ensure fairness for all interested investors.

“We should not rush into appointing an investor just to meet a deadline. When the project delays or finishes in low quality, we’ll lose more than a few months’ time gained from starting earlier,” he told VnExpress International.

The Ministry of Transport last month proposed three options for funding the airport, to be built in the southern province of Dong Nai. It strongly recommended that the Airports Corporation of Vietnam (ACV), which operates 21 airports in the country, be the main investor.

Another option is a public-private partnership (PPP) model with a due bidding process. However, the bidding process could increase project duration by 18 months, making the 2025 deadline difficult to achieve, the ministry has noted.

Echoing Doanh, economist Ngo Tri Long said that an international bidding process will be the most transparent and effective funding option for a major project such as Long Thanh, as long as the government specifies clear requirements for investors to prevent the budget from ballooning while maintaining high quality.

The ministry said that ACV should build and operate Long Thanh because it has constructed runways and terminals in the country’s major airports, therefore has relevant experience.

But aviation expert Nguyen Thien Tong was against this move, saying the project’s price tag was far beyond ACV’s capacity.

The first phase of the airport is set to cost $4.8 billion, while the ACV has said it can use $1.5 billion of its own money and borrow the rest or strike partnership with other firms who can access the needed funds.

There is also a lot of financial risk if ACV borrows the rest of the money, Tong said. If it cannot make profit from the first phase of the project, it would not have the money to invest in the second and third phases, he added.

This is not the first time that the transport ministry is prioritizing ACV for an airport project. It has previously recommended the firm for construction of Tan Son Nhat International Airport’s third terminal in HCMC, a move that has also invited criticism from experts over the lack of competition.

Another aviation expert who asked not to be named said that even though Prime Minister Nguyen Xuan Phuc has been calling for the participation of private firms in building and operating airports, the transport ministry has only been prioritizing ACV in aviation projects, arguing that it had national security implications.

But an airport can be operated by many different firms, so letting ACV invest and operate the airport alone could delay development of the country’s aviation sector, the expert added.

Economist Doanh also said that appointing ACV would increase the risk of corruption and group interests, which could lower the effectiveness of the investment.

Apart from inviting bids and appointing ACV to be the investor of the project, the transport ministry has also suggested the option of borrowing from the official development assistance (ODA) funds, but most experts warned against this option because it could lead to a rise in public debt and a dependence on the lending country’s contractors and consultants.

The Long Thanh International Airport was approved by the National Assembly four years ago, but funding has remained a big question until now, even as construction of the first phase is set to start next year.

The airport is to be built in three phases over three decades. The first phase is scheduled for completion in 2025, when the new airport will be able to handle 25 million passengers a year. The next two phases will run from 2030 to 2035 and from 2040 to 2050.

Once completed, it will have an annual capacity of 100 million passengers and five million tons of cargo.

The three phases are estimated to cost $5.4 billion now, but experts have warned this could double if the project was delayed by five years.

Located 40 kilometers east of HCMC, the airport is expected to take up the overflow from the largest existing airport in the country, the Tan Son Nhat International Airport.

Vietnamese airports served 103.5 million passengers last year, up 11 percent from 2017, according to ACV.