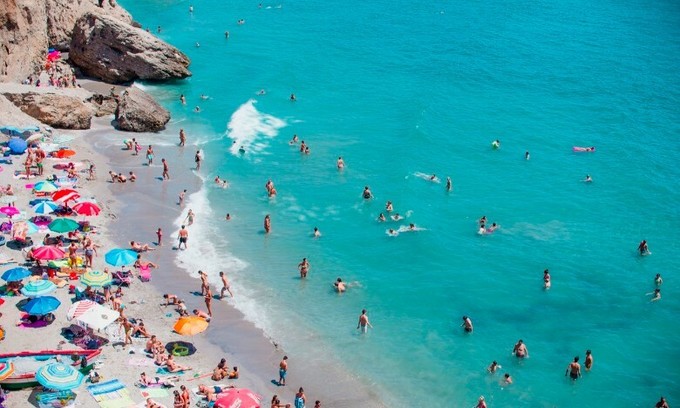 Tourists on a beach near Tokyo, Japan. Photo by Shutterstock.

A Vietnamese university student died Monday while her male friend is missing after a large wave swept them out to sea on a Japanese beach.

The two were visiting from Tokyo for a two-day Mountain Day holiday at Takeigama beach in Kashima, Ibaraki Prefecture.

Voice of Vietnam reported that at around 6 p.m. the 23-year-old woman was swimming when she was swept out into the ocean. Her Vietnamese friend, 25, an office worker, tried to save her in vain and was also dragged out into the sea.

On Tuesday the police recovered the body of the woman but the man was still missing, and rescue officials said they are searching for him.

The accident occurred in an area where swimming is prohibited due to dangerous rip currents. The Mito Meteorological Observatory had earlier warned about strong waves in the area due to the impact of typhoons, public broadcaster NHK said.

During this year’s Mountain Day holidays 13 tourists were killed across Japan.

Last month Vietnamese tourist Nguyen Hoang Hieu Dan was swept out to sea by a giant wave at Kelingking beach in Bali while he was on holiday with friends.

The number of Vietnamese working and living in Japan jumped 26.1 percent in 2018 from a year earlier to 330,835, or 8 percent of all foreign nationals living in the country, Japan Times reported.

Vietnamese have overtaken Filipinos as the third largest group of foreign nationals in Japan behind Chinese and South Koreans.