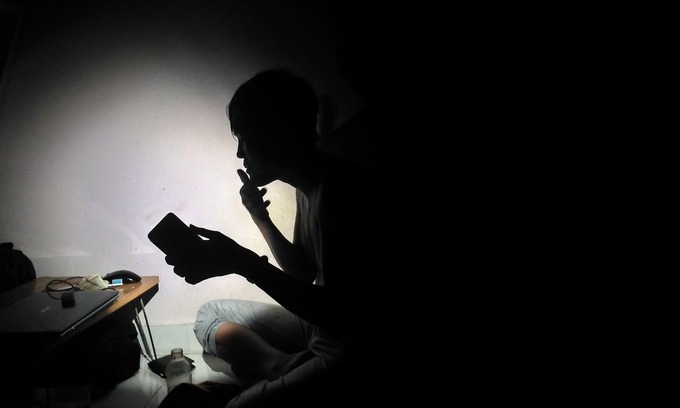 A fifth of young Vietnamese are bullied online but most do not know how to find professional help for this, a UNICEF survey has found.

Seventy percent of young Vietnamese respondents told the Violence against Children survey, which was released last week, they were not aware of any helpline or service in case of cyberbullying.

The rates in neighboring countries were much higher, including 45 percent in Indonesia and 30 percent in Malaysia.

Tellingly, almost half of the Vietnamese respondents said they knew about private online groups inside the school community where information about peers was shared for bullying.

But 96 percent said they have not used technology or digital platforms to harass or bully others, with only 4 percent admitting they have.

The survey notwithstanding, the reality is that there is limited data or evidence on cyberbullying and online child abuse and exploitation in Vietnam, Rana Flowers, UNICEF Representative in Vietnam, told VnExpress International.

But the online risks are evident. Sexual grooming, luring, exploitation and abuse, both online and offline, and exposure to inappropriate, violent and hateful content are frequently reported.

Hoang Huynh, 20, remembers vividly what it was like to be besieged by brutal online bullies.

An avid player of League of Legends (LoL), an online strategy game, the Saigon university student said casual cruelty would be perpetrated during every single game he played for years.

“When somebody is doing badly [at the game] or have bad [Internet] connections, others would tell them to ‘go to hell’, ‘die b*tch… why do you still live?’”

Calling other gamers stupid idiot or f*ggot was also a constant refrain in Hoang’s public chat section on LoL.

Thirteen percent of Vietnamese said the violence between young people happened in online games, while 68 percent pointed to social networks, mostly Facebook, as the bullying arena, according to the UNICEF survey.

The verbal insults were publicly posted online (32 percent) or sent via private messages (24 percent), the 197 Vietnamese respondents who replied to a question on whether the bullying is public or private, said.

Researchers have pointed out that cyberbullying can potentially have a stronger negative impact on the victims than verbal abuse because it reaches a wider audience and it leaves a permanent digital footprint.

Some young people turn to cyberbullying because they think it helps solve their social problems by bringing attention, recognition, popularity, and even power to them.

“I was always known for having a temper and I feel my temper is constantly challenged while playing the game,” Huynh said. He took out the frustration from the online abuse on his family by snapping at them, he said.

Cyberbullying can be in the form of violence and aggression online, and it has a negative and long-term impact on children affected by or involved as bullies, victims or witnesses, Flowers said.

Online bullying can also take the form of boycotting through setting up anti-groups, making up stories or rumors or threats to disseminate sensitive images.

In Vietnam, these have been known to result in disastrous real-life events.

Last year the body of a 16-year-old girl was found in a pond near her home in Quynh Luu District, Nghe An Province in central Vietnam.

Her classmates, teacher and parents were completely shocked by her death, and said they had not noticed anything unusual about her before the incident. She topped her class and was a model student.

Tran Canh Ban, her head teacher, hinted that her death could have been linked with a video showing her and a male classmate kissing, which had been posted on social media a few days before her death. It had attracted a number of vicious comments.

The student left a one-page suicide note for her parents, which reportedly apologized to them. The family refused the police’s offer of a biopsy, leaving the real cause of her death a mystery.

In 2016 the media spotlight was on Ngoc Han, a 13-year-old student in the central province of Khanh Hoa who doused a classroom in gasoline and set fire to it.

The fire only caused minor damage to the school but badly burnt both her legs.

An investigation found her bizarre action followed a dare she had posted on Facebook saying she would burn her school if the post got 1,000 likes. When the number was reached she was goaded by some of the same people to act on her promise.

They bombarded her with messages exhorting her to burn the school. Some even threatened to beat her up if she backed out.

Some 10 students met her a few days after the post, gave the gasoline and ordered her to start the fire.

Her story was widely discussed on social media and in the media, with many blaming her for being immature and reckless.

The survey asked the respondents who was responsible for preventing cyberbullying.

In Vietnam, 44 percent thought the answer to the problem was they themselves, while 30 percent believed it was the government’s job. Some said the responsibility lay with Internet companies (14 percent) and schools (12 percent).

However, even important figures in young people’s lives are not knowledgeable about this issue or how to handle it.

Flowers said: “Parents and children in Vietnam don’t necessarily perceive cyberbullying as a serious concern. When asked about on-line risks – parents worry about gaming, screen time – but they are distant from and uninformed about the dangers and risks their children face.”

A 2017 report titled Child Online Protection Capacity Assessment by UNICEF and Vietnam’s Ministry of Labor, Invalids and Social Affairs found that children used the Internet without adult supervision, and had almost no understanding of threats online or how to manage them. They simply believed that abuse could never happen to them.

This is coupled with the fact that older generations are scrambling to catch up with the technological sophistication of their juniors, said Flowers.

They are generally lack the understanding that online risks like bullying, sexual abuse and exploitation and that non-physical abuse can also have a damaging and long-lasting impact on a child’s well-being, she said.

Besides, Vietnam does not have legislation related cyberbullying, she added.

What can be done

Since it is impossible to stop young people from going online, UNICEF Vietnam is collaborating with the ministries of education and social affairs to establish measures to prevent violence and (cyber) bullying and respond to it when it occurs.

This includes the creation of accessible and confidential ways for students to report any act of violence and (cyber) bullying at school without fear of reprisal.

The data collected with the recently published survey will also help us continue the research in understanding the degree to which children are at risk from these forays, Flowers said.

“The strengthening of the capacity of staff at the National Child Protection Helpline to deal with cases of cyberbullying will also be a focus as it supports the government and communities to deal with cases of violence against children in a holistic manner to both protect and support victims and help children and young people involved in and perpetrating online abuse to change,”she said.

For some people, the solution can be as simple as signing out.

Huynh, the 20-year-old HCMC student, said he quit LoL recently after seven years in the community.

“The negativity was not worth it any more. Now I think [the experience] is a life lesson for me.”

But games are just one of the many cyberspaces where someone can be exposed to anonymous abusers.

There are 62 million active social media users in Vietnam, or nearly two-thirds of the country’s population. Of them, six million were Facebook and Instagram users under the age of 18.

A recent survey by HCMC market research firm Q&Me found more than 80 percent of Vietnamese users spend more than two hours a day on apps, the most popular being Facebook, YouTube, Messenger, and Zalo.