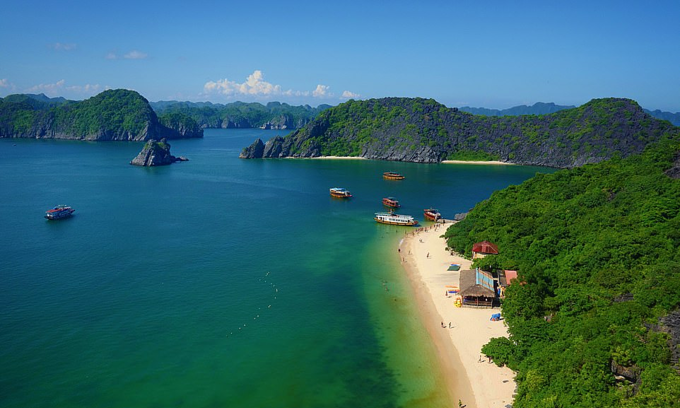 Ha Long Bay is a UNESCO heritage site and one of the most popular tourist attractions in Vietnam. Photo by Shutterstock/Andy Tran.

British travel magazine Rough Guides has voted for Ha Long Bay as one of the 100 most beautiful places to visit next year.

In the “The Rough Guides to the 100 Best Places on Earth,” the magazine described “the scattering of limestone pinnacles jutting out of the smooth waters of Ha Long Bay”, around four hours east of Hanoi, as an “incredible sight.”

It is the only Vietnamese destination in the list, which covers many historical and cultural sites around the world such as the Angkor Wat in Cambodia, the Forbidden City in China, Kamniške-Savinja Alps in Slovenia, the Ngorongoro Conservation Area in Tanzania, and the Genghis Khan Equestrian Statue in Mongolia.

Dropping anchor in the bay to explore small islands and caves is a once-in-a-lifetime experience, Rough Guides said, adding that “the best junk boats have private cabins and serve gourmet food and in the early morning you can pull back the curtains to watch the sunlight dancing on the emerald green water.”

Since its recognition as a UNESCO natural world heritage in 1994 Ha Long Bay has entrenched itself on the global tourism map, receiving rave reviews from travel bloggers and filmmakers. Around 5.2 million foreigners visited the bay last year, up 22 percent from a year earlier. A total of 15.6 million visited the country.

In its latest conservation move, the Ha Long Bay management said all tourism services in the bay would limit the use of plastic bags and straws from September 1. Fifteen local firms providing tourist boats, kayaks and high-speed boats will embark on a pilot program, banning the use of plastic products on sightseeing boats, starting August 1.

The recent improvements in infrastructure have made traveling to and around Ha Long much easier for foreigners. Last December Van Don International Airport, 50 kilometers from Ha Long Bay, opened.

The South China Morning Post recently named Ha Long Bay in its list of 10 most popular Asian attractions. British magazine Woman and Home last May labeled the bay one of the most mentioned global cruise destinations on Instagram.