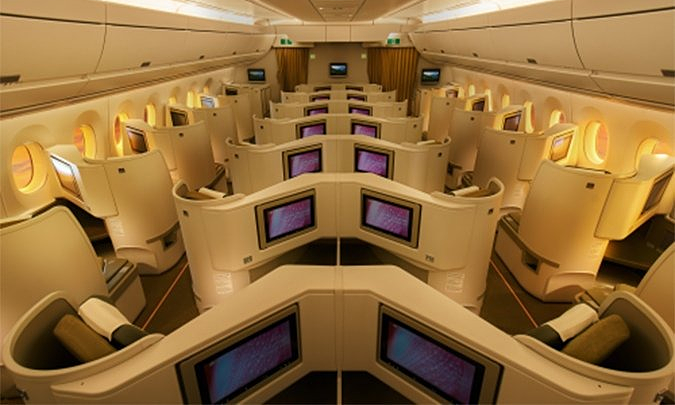 Screens inside a Vietnam Airlines’ Airbus A350 aircraft, April 2019. Photo by VTC.

National flag carrier Vietnam Airlines said it would offer Wi-Fi on some of its Airbus A350 aircraft from October 10.

The cost will range from $8 to $10 depending on whether passengers want to text, email or surf the web.

Nguyen Nam Tien, deputy head of the carrier’s IT department, told the press on Tuesday the satellite service is more expensive and slower than ground-based systems, but Vietnam’s infrastructure is not developed enough for the latter option.

Swiss company SITAONAIR will be the service provider.

The Wi-Fi will be turned on when the aircraft reaches an altitude of 10,000 feet.

Tien said the service would be provided on four aircraft to start with before more are added soon.

Duong Tri Thanh, Vietnam Airlines’ CEO, said at the 2019 Vietnam ICT Summit last Friday that the move is part of a strategy to become a digital airline by 2020 and an international five-star airline in the future.

Later 20 other aircraft would offer the Wi-Fi service, he said.

In the last few years many airlines around the world have begun providing onboard Internet services, though none in Vietnam.

The country’s largest airline by passengers has been facing rising competition from private budget carrier Vietjet and others like the latest player Bamboo Airways.

Vietnam Airlines has a nearly 51 percent of the domestic market share if its affiliates Jetstar Pacific and VASCO are taken into account.