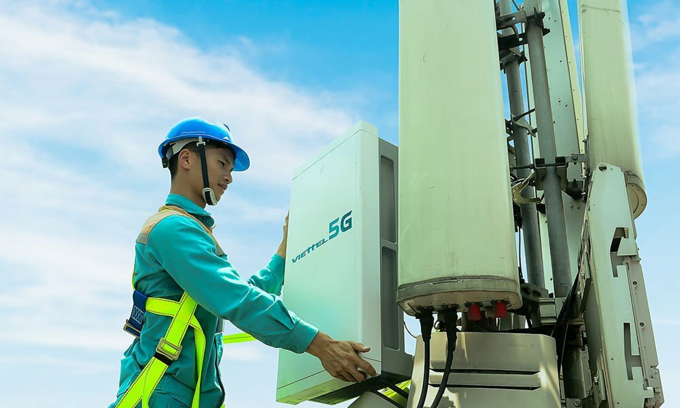 A staff of Viettel sets up its first 5G station of Ho Chi Minh City, August 9, 2019. Photo courtesy of the Ministry of Information and Communications.

Viettel, the country’s largest telecommunications company, completed building infrastructure and installing equipment for operating a 5G station in the city’s District 10, the Ministry of Information and Communications announced on its news portal.

The operation of this first station in HCMC also marks the first time that Viettel has exploited the Telco Cloud, a virtualized telecom infrastructure to run digital services and agile operations. This will help the company build the whole core network for the 5G technology.

Its 5G internet speed, as piloted, now stays at 1,000-1,300 megabits per second and the company has said it will work to move up this speed in the future.

The telco has also planned to speed up its 5G network establishment process and will set up 10 more stations in HCMC, the country’s largest metropolis, this month.

Tao Duc Thang, deputy CEO of Viettel Group, said these stations will work as a pilot plan for Viettel to get a complete assessment of its service so that it could launch it commercially next year.

The U.S. and China are currently the only two in the world that have begun offering 5G commercial services.

Viettel launched its first 5G station of Vietnam in Hanoi early this year and made the first 5G phone call in May.

It was the first firm in the country to receive permission to trial 5G services in January. It was followed by MobiFone.

Last November, Information and Communication Minister Nguyen Manh Hung said at a conference that Vietnam should test 5G in 2019 and ensure nationwide coverage by 2020.

“Vietnam should be one of the first countries to launch the network, at least in Hanoi and HCMC,” he had said. The country had been one of the last in Southeast Asia to roll out 4G services.

5G is the latest generation of mobile Internet connectivity, and is expected to offer much faster speeds and more reliable connections on smartphones and other devices compared to the current 3G and 4G technologies.