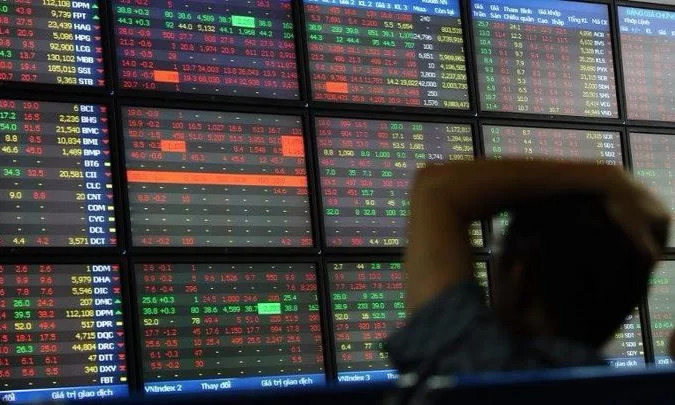 An investor watches stock figures on a display at a brokerage in Hanoi. Photo by Reuters.

VN-Index had lost a total of nearly 33 points, or 3.3 percent, after the three consecutive sessions, from 977.39 points last Thursday. However, analysts have noted that the decline has slowed compared to Monday’s 1.81 plunge, with bottom-fishing cash flowing into the market and many stocks rebounding to their initial prices.

The VN-Index initially fell 15 points in the morning, but narrowed the drop to over 8.5 points as some blue-chips gained in the afternoon. VIC shares of Vingroup gained 1.5 percent, PNJ of Phu Nhuan Jewellery rose 3.8 percent, and MWG of Mobile World went up 0.5 percent.

While other blue-chips like MSN of Masan Group and VHM of Vinhomes continued their falling momentum, smaller cap stocks for industrial and manufacturing sectors, expected to benefit from diverted investment as the trade war escalates, again recorded strong gains.

Losses spread in the Asia-Pacific region Tuesday with indexes from Tokyo to Hong Kong falling sharply. Shanghai and Sydney shed 2.6 percent, while Manila and Wellington were also down around two percent as U.S. – China dispute turned into a “currency war,” Al Jazeera reported.