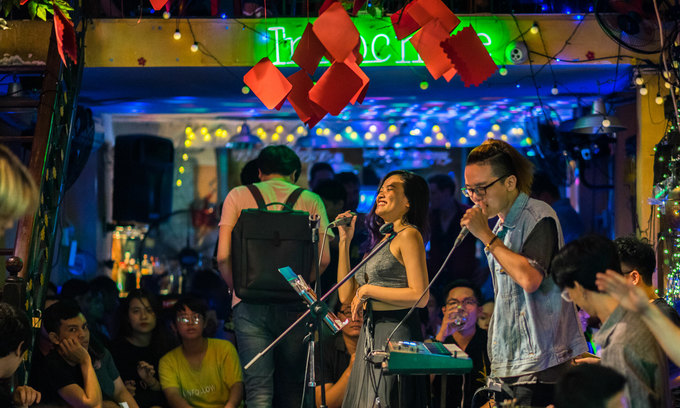 A woman and a man sing at Bui Vien walking street in Ho Chi Minh City, a popular area for tourists in the evening. Photo by Shutterstock/David Bokuchava.

Vietnam wants to develop more nighttime activities including shopping and amusement to help attract tourists and persuade them to spend.

Prime Minister Nguyen Xuan Phuc has ordered government agencies to study China’s efforts in this area and adopt a similar model. In Beijing, shops and restaurants which open from 8 p.m. to 6 a.m. could receive a subsidy of $70,000, and areas which operate at least 12 hours at night get $700,000.

Nguyen Cong Hoan, deputy director of travel agency HanoiRedtours, told VnExpress International that evening is when tourists spend generously on entertainment and shopping, and therefore a nighttime policy would benefit the country.

“Major cities like Hanoi and Ho Chi Minh City have night markets, but there is demand for more activities. The country needs more restaurants, malls and entertainment areas remaining open after midnight to attract tourists.”

Vietnam has been focusing on nature and cultural tourism, while recreational tourism such as theme parks, shopping centers and late-night shows still have a long way to go, he said.

Hoan pointed out this is why the rate of returning foreign tourists is low compared to countries like Thailand and Singapore. According to the Pacific Asia Travel Association, about 10-40 percent of first-time visitors to Vietnam return, while the rate is 80 percent in Thailand.

Nguyen Quoc Ky, CEO of leading tourism firm Vietravel, said revenues from evening services could be much higher than in the day, but most tourism companies are focused on daytime activities, he said.

Apart from markets and backpacker areas, they do not offer tourists many other options at night, according to some tour operators.

Other industry insiders said night clubs, gaming zones and karaoke bars could be revenue spinners at night, and transport services and cross-border financial transactions should also be developed.

But some experts also expressed fears. Economist Ngo Tri Long said a nighttime economy could make drugs and prostitution more commonplace, which is the reason why the country has been reluctant to sanction late-night activities.

Thorough research is needed to see which urban areas are suitable for such policies so that locals’ lives are not affected, he said.

Vietnam’s GDP grew by 6.76 percent in the first half of this year, the highest rate for the period since 2011, according to the General Statistics Office. The Asian Development Bank last week forecast GDP growth of 6.8 percent for the full year, the highest in Southeast Asia.