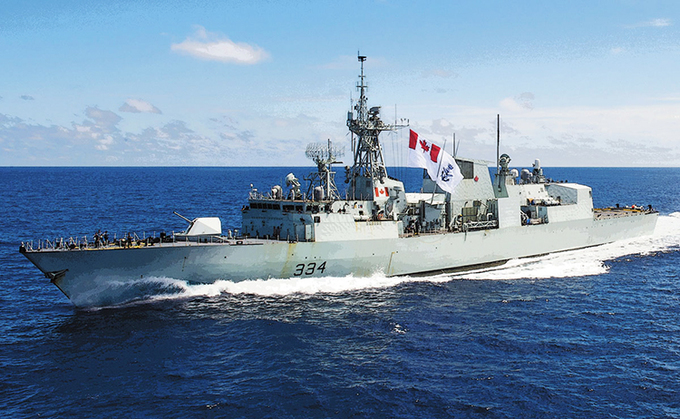 Canadian naval vessels are expected to visit Cam Ranh military base in central Vietnam for the first time ever on June 10.

According to the foreign affairs department of Khanh Hoa Province, home to Cam Ranh, the ships will visit for four days as part of the Canadian Navy’s exchange program with their counterparts in the Asia-Pacific.

The highlight of the visit would be the final day, June 13, when the Canadian vessels join Vietnamese naval ships for an exercise in the sea, Lieutenant Colonel Jacob French, commanding officer of the HMCS Regina, said.

One of the most advanced warships in the world, the HMCS Regina is a Halifax-class frigate that has served since 1993. It is equipped with anti-submarine and anti-floating ship combat weapons and radar systems that have powerful anti-aircraft combat capabilities.

The Asterix, a converted commercial container, is an interim replacement for a Protecteur-class replenishment oiler. Originally launched in Germany in 2010, the ship was converted and delivered to the Canadian Navy in December 2017 and will be in service well into the 2020s.

Cam Ranh, established as a military base by the U.S. during the Vietnam War, plays a key role in Vietnam’s national defense with an air base once used by the U.S. and Soviet forces and a deep water bay home to its modern, Russian-built submarines.