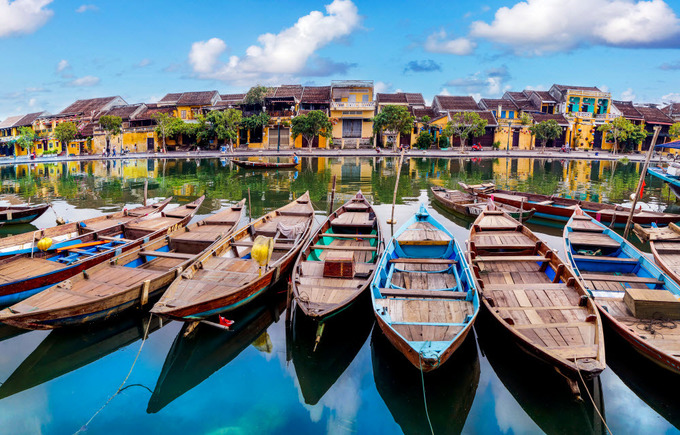 Old houses are seen across the Hoai River in Hoi An. Photo by Shutterstock/Hung Minh.

The ancient town of Hoi An has topped this year’s tourism hotspot listing by New York-based Travel + Leisure.

The 400-year-old town in central Vietnam has leaped from the 8th position last year to the top of this year’s global ranking based on votes by Travel + Leisure readers.

Famed for the slow pace of local life as also the efforts taken to make its streets pedestrian friendly, Hoi An moved ahead of many prominent Asian destinations like Thailand’s Chiang Mai (3rd), Indonesia’s Ubud (6th), Tokyo (7th) and Kyoto (8th) in Japan, India’s Udaipur (10th) and Bangkok (15th).

Every year, for its World’s Best Awards survey, Travel + Leisure asks its readers to weigh in with travel experiences around the globe and share their opinions on the top cities, islands, cruise ships, spas, airlines, and other topics. Readers are asked to rate cities based on their sights and landmarks, culture, cuisine, friendliness, shopping, and overall value.

Around 30 kilometers south of Da Nang City, Hoi An grew from a small rural village to the busiest trading port in Southeast Asia in the 16th century, and also became famous for ceramics and high-grade silk.

“It’s great that the inner part of the town is restricted and cars aren’t allowed, so one can walk down the center of the street to the shops and markets,” said one Travel + Leisure reader.

The town has been a pioneer in the country since 2004 for ensuring pedestrian-friendly streets. Motorbikes and cars are banned from the town center for large parts of the day – from 9 a.m. to 11 a.m. and from 3 p.m. to 9:30 p.m.

Accommodation reservations provider Agoda recently said Hoi An was one of world’s six best places to explore on bicycles.

Last year, Hoi An ranked second among the list of 10 safest and most exciting places on the earth for solo travelers by travel editors at Momondo, a U.K. based travel site.

Global readers of the American news network CNN listed the ancient town as one of the 16 best places in the world to relax and get rid of stress.

The number of foreign visitors to Hoi An skyrocketed 90 percent from a year earlier to 3.7 million in 2018, official data shows.