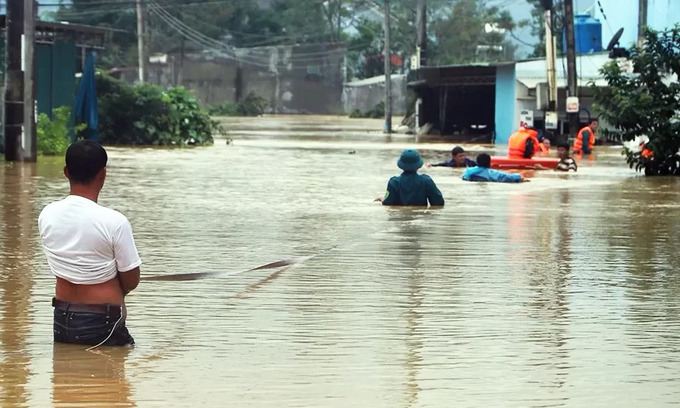 People are evacuated from a flooded area in Lam Dong Province in the Central Highlands, August 8, 2019. Photo by VnExpress/Hoai Thanh.

Greenhouses and deforestation are looming large as floods and landslides triggered by torrential rains in the Central Highlands have killed 10 people.

Dak Nong Province has suffered the most in terms of human casualties, losing at least five people since Wednesday, the Central Steering Committee on Natural Disaster Prevention and Control said Saturday.

Other provinces in the region, Gia Lai, Dak Lak, and Lam Dong, have reported one death each, while Kon Tum has confirmed two deaths.

The severe flooding has submerged more than 3,000 houses and more than 20 hectares of rice, agricultural crops and killed hundreds of poultry fowls in the Central Highlands and southern provinces, with total damage estimated at VND992 billion ($43 million).

The Central Highlands region produces most of Vietnam’s coffee, a major export item.

On Friday afternoon, many communes in Bao Loc Town, Lam Dong Province, were still surrounded by muddy waters. Many houses had collapsed or were badly damaged.

Rescued from her flooded house on Friday, Tran Thanh Thuy, 14, was waiting for the rain to stop to return home.

“The heavy rain began early and went on until 9 a.m. and the flood waters were coming very fast. In a little more than two hours, the water flooded most of my house and all four of us in the family had to climb upstairs,” Thuy said.

After hours of panic, they were rescued by soldiers in a canoe and taken to their relatives’ house.

Thuy’s house was one of 800 that were flooded in Bao Loc following severe flooding on Thursday.

Many streets in the popular resort town Da Lat, which is more than two hours drive away, were also flooded. Landslides from over 10 kilometers of Bao Loc Pass on Friday also disrupted traffic between HCMC and Da Lat.

In Dak Lak Province, the flood waters started receding on Friday after flooding 800 houses. Local residents have begun returning home to clean up.

Nguyen Van Son, director of Lam Dong’s Department of Agriculture and Development, said that the flodding in the province was much bigger and more serious than before.

He said that apart from climate change, the severity of the flooding was influenced by the profusion of greenhouses in Da Lat.

Once favored by holidaymakers in tropical Vietnam for its year-round temperate climate, Da Lat, a top holiday destination in Vietnam, was getting warmer at an alarming rate due to the mushrooming of agricultural greenhouses on its outskirts and in nearby areas.

The number of greenhouses in Da Lat and neighboring farming regions has grown by five times over the past five years, said Vu Ngoc Long, former president of the Southern Institute of Ecology.

Official reports have mentioned the total area of greenhouses in Da Lat and its vicinity at around 5,600 hectares, but Long believes the actual number is likely much higher.

However, Dang Van Chien, director of Dak Lak’s hydrometeorology center, said there were many reasons for the worsening flooding situation, but the main reason was deforestation.

Most trees were chopped down by illegal loggers or cleared to make way for cash crops, roads or hydropower plants.

The southwestern monsoon and tropical depressions in the East Sea, internationally known as the South China Sea, have been triggering downpours in the Central Highlands and southern Vietnam, the National Center for Hydro-Meteorological Forecasting had warned.