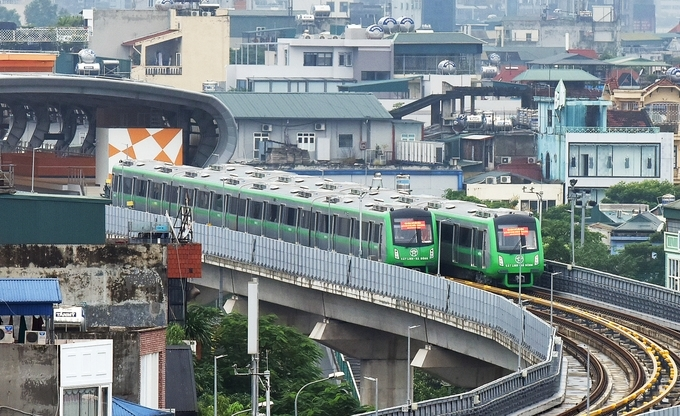 Two Cat Linh-Ha Dong trains leave the station in Hanoi during a trial run in September 2018. Photo by VnExpress/Giang Huy.

The Ministry of Transport’s mismanagement in allowing piecemeal work has resulted in ballooning costs and prolonged delays, state auditors say.

The MoT also failed to evaluate all technical aspects of the project, causing planning to be changed multiple times. Furthermore, it conducted land clearance and handovers at a sluggish pace, slowing down the metro line, said Tran Hai Dong, head of the auditing team for the project.

“In the process of setting up the metro project, all phases from getting consensus on architectural plans, approving changes, clearing and handing over land, were delayed by 1-5 months. The delays caused labour and material costs to soar,” Dong said.

The State Audit agency also found that investors had not factored in operating costs, which would account for a large proportion of costs once the metro service began operation, in its financial evaluations. This resulted in an incorrect financial appraisal of the project and its costs, he added.

Work on the Cat Linh-Ha Dong elevated railway began in 2011 and was originally scheduled for completion in 2013. But several hurdles, including loan disbursement issues with China that were only resolved in December 2017, stalled it for years.

The original estimated cost of $552.86 million ballooned to more than $868 million, including $670 million in loans from China.

The metro eventually entered the testing phase in March with all 13 cars carrying out trial runs on both lines. The ministry wanted commercial operations to begin at the end of April, but this deadline too was missed.