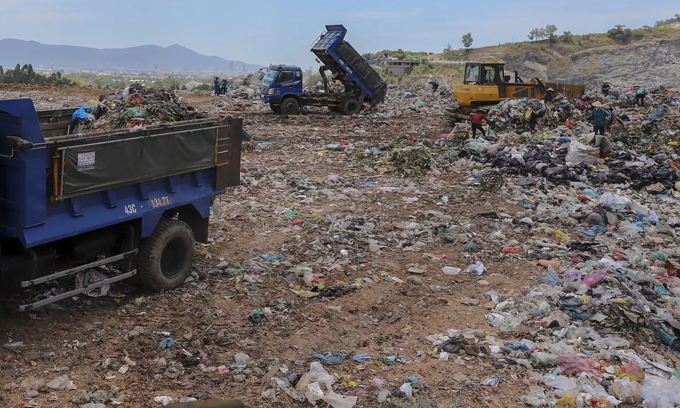 The city will use VND1.94 trillion from its own budget and call for the rest from private investors, officials said.

The new plan targets to have all society segments, from families to industrial parks and state agencies, sort trash at source.

The fund will be used to build new facilities and upgrade existing ones to treat waste after it has been sorted. The city wants to have 95 percent of its domestic solid waste collected and treated, and stop burying trash by 2020.

According to the municipal Department of Environment and Natural Resources, Da Nang, which is currently home to 1.2 million residents, discards 1,100 tons of domestic solid waste each day.

In July, Da Nang encountered a trash problem when local residents protested against a proposed waste treatment complex by blocking entry to it for garbage trucks.

People living near Khanh Son landfill in Lien Chieu District, the only one in the city, blocked its entry after failing to persuade city authorities not to turn it into a solid waste treatment complex which burns trash at the landfill.

Khanh Son, in use as a landfill now for nearly three decades, has become overloaded and a source of pollution.

Locals have been demanding for long that authorities move the facility and have blocked garbage trucks several times in protest.

Authorities had promised that the landfill would be shifted this year, but they changed their mind in May, saying moving was not feasible because there was no solution for the existing 3.2 million tons of trash in the landfill.

In May, the city, the third largest in Vietnam after Hanoi and Ho Chi Minh City, had asked the Military Zone 5 Command for 7.7 hectares (19 acres) of land for expanding the landfill. Military Zone 5 covers the Central Highlands and south-central Vietnam.

Da Nang has transformed over the last few decades from a sleepy fishing town to a major tourism destination with long beaches and upscale resorts.

Home to Asia’s most beautiful beach My Khe and next door to the UNESCO heritage site Hoi An ancient town, Da Nang received 1.9 million foreign tourist arrivals in the first seven months of this year, up 11.2 percent against the same period last year.