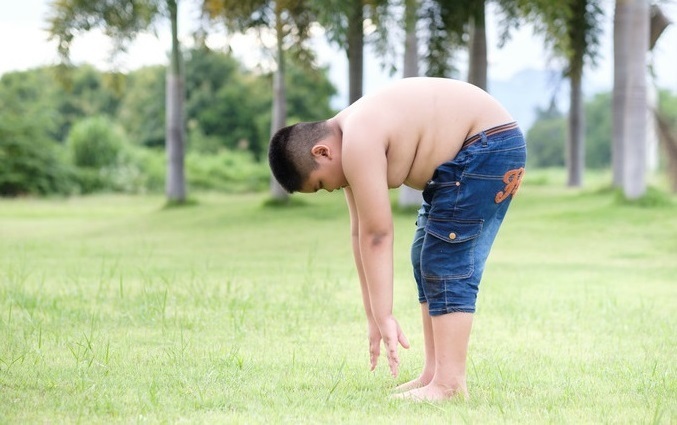 The number of kids not engaging in any healthy physical activity has been on the rise for many years now. Photo by Shutterstock/ MILKXT2.

All of 12 years old, Bao Minh’s worst fear is not of ghosts. He’s also not afraid of heights. But he looks at stairs with some dread.

Climbing the stairs is among the least favorite activities for this boy who lives in a premium apartment in Hanoi, alongside running or even walking for more than five minutes. Any body movement that gets him sweating is looked upon with disfavor by Minh.

“I do not work out or play sports. Why make your body suffer when you can enjoy the air-conditioning with a snack?” he said, sitting on a couch with eyes glued to his favorite TV show.

Each week, Minh gets reluctantly active for about 15 minutes during his physical education (PE) sessions, and he hates this school subject the most. He passes with a minimum score in every test.

Minh’s story can be told of more and more young boys and girls across the country, especially in major cities. While the country gets kudos for the sight of the elderly up and about, exercising and dancing in the very early hours of the morning, the number of kids not engaging in any healthy physical activity has been on the rise for many years now.

A Stanford University survey in 2017 found Vietnam among the least physically active countries in the world. It showed that an average person walked only 3,600 steps a day, compared to 4,000 steps in Philippines, 5,800 steps in South Korea and 6,200 steps in China.

About 30 percent of the population do not get the physical recommended by the WHO, of at least 150 minutes a week, according to study by the Ministry of Health.

The figures are worse for children. About 46 percent of students in secondary school and 39 percent in primary school in Hanoi and Ho Chi Minh City don’t get enough physical activity, the National Institute of Nutrition estimates.

Hoang Bao is among those students. Every morning, the 15-year-old is driven to school by his father and gets to extra classes by hailing a Grab ride.  With about 12 hours of studying a day, it is almost impossible for him to find time for physical activities, even walking for more than 10 minutes.

“My parents allow me to have 30 minutes of free time in the evening, and I often spend it on gaming. I used to ride a bike to school, but my mom is concerned that I will be tired before classes so she tasked my dad with driving me.”

One of the reasons for the alarming figures on physical activity in Vietnam is the lack of priority given to physical education in schools and families.

About one-third of Vietnam’s 80,000 PE teachers are only fill-ins and not trained for the job, according to data from the Ministry of Education released at a recent conference.

Minister of Education and Training Phung Xuan Nha said at the conference that PE teachers fell short in both numbers and strength. “They lack knowledge and skills in instructing students to perform activities and play sports. The curriculum is mostly theoretical and lacks practical training.”

PE infrastructure is also neglected, mostly. About 80 percent of schools do not have a PE house, and 85 percent lack a dedicated PE training ground, according to the education ministry.

Hoang Bao sees his school in these those figures. His secondary school near Hoan Kiem Lake in downtown Hanoi has not really been upgraded for several decades. A small open space is used for every school activity, but it is unsuitable for any sports.

“During major exams, PE sessions are always cut to have time for more important subjects. Teachers only let us do basic gymnastics exercises during PE lessons because there is no equipment.

A large number of Vietnamese parents are also not investing properly in their children’s fitness, said Vu Thu Huong, lecturer in primary education at the Hanoi National University of Education.

Focused strongly on their children being good at math and English, many urban parents tend to overfeed their children and do housework for them so the latter can have more time for study.

“Many Vietnamese children don’t have the opportunity to be physically active, and iPads and computers remain their main sources of entertainment.”

Bao can relate to that. His parents recently prohibited him from playing soccer on Sunday afternoons and asked him to take an extra math class instead. “My parents just want me to enter a good university. Sports and physical activities are the last thing they want me to spend time on.”

Alongside the lack of physical activity is the rising presence of fast food and beverages chains, which are popular among kids in particular.

Market research firm Nielsen said in a report last year that the most popular leisure activities for Generation Z and millennials in Vietnam are watching TV and going to a bubble tea shop, and they are the ones in the family who decide what beverages and snacks to buy.

The consequences of insufficient physical activity and unhealthy food and drink habits are increasingly visible, and it is not a pretty sight.

Vietnam is among the top countries in Asia in the number of people with diabetes, at an estimated 5.5 percent of the population aged 20-79, according to the Vietnam Association of Diabetes and Endocrinology.

The cost for diabetes treatment was estimated at $320 million in 2007, and this figure will likely reach $1.1 billion in 2025, the association said.

Although Vietnam’s overall obesity rate remains low compared to other Southeast Asian countries, there are signs that it is on the rise in major cities.

In 2015, about 50 percent of children in Ho Chi Minh City and 41 percent in Hanoi were overweight, while this figure was only 12 percent in 1996 for both cities, according to the National Institute of Nutrition.

Authorities want to change the situation. The health ministry aims to reduce the number of people engaging in low activity from 30 percent to 10 percent by 2025. It is also urging locals to walk 10,000 steps a day to stay fit.

But these plans mean nothing to Bao Minh. Although his parents have suggested that they pay for gym, soccer, and swimming, he is interested in none of these activities.

“I play soccer on my smartphone. It’s a kind of sport, too.”