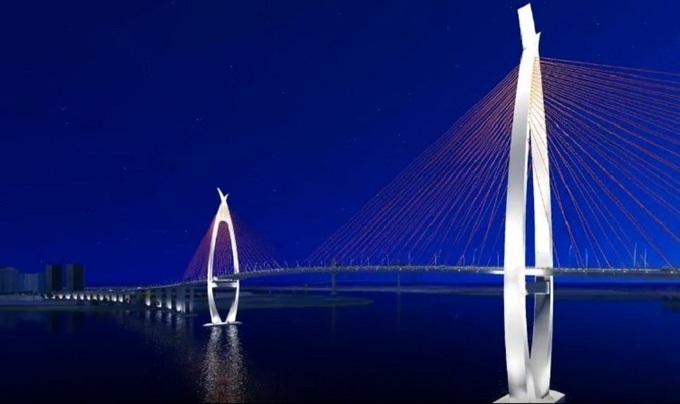 An artist impression of the Can Gio Bridge in Ho Chi Minh City. Photo courtesy of HCMC Transport Department.

Construction of the Can Gio Bridge, connecting Ho Chi Minh City’s outlying namesake district with the city’s center, will start in 2022.

Deputy Minister of Transport Bui Hoa An announced the construction schedule at a meeting with the district’s voters on Monday, saying the completion date is set for late 2025.

He expressed the hope that locals owning lands could reach agreement with authorities to hand them over so that the work could be implemented on schedule.

The VND5.3 trillion ($230 million) bridge will replace the Binh Khanh ferry as the means to connect the coastal Can Gio District with the rest of HCMC.

The cable-stayed bridge will be 3.4 kilometers (2.1 miles) long and have four lanes and navigational clearance of 55 meters (180 feet).

It will start at the intersection of roads 15B and 2 in Nha Be District’s Phu Xuan urban area, span the Soai Rap and Cha Va rivers and end on Rung Sac Street in Can Gio District.

City authorities had initially thought of building it under a combined build-operate-transfer and build-transfer model.

But the National Assembly passed a law on public-private partnerships last June that does not feature the latter model.