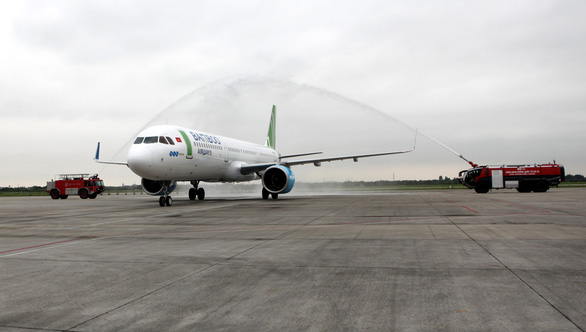 Vietnam’s Ministry of Transport has given a nod to a request by Bamboo Airways, the country’s newest airline, to expand its fleet to 30 planes by 2023.

After considering opinions of relevant parties at a working session on Friday, the ministry agreed that it is fundamental for Bamboo Airways to carry out the fleet expansion plan in the next four years as an airline needs a fleet of at least 25 – 30 jets for stable and efficient operation.

The airline previously sought approval from the ministry to add more aircraft to its fleet, having been using only ten planes since its launch in January this year.

The transport ministry noted, however, that its green-light is not enough for Bamboo Airways to start the expansion.

The carrier still needs the Civil Aviation Authority of Vietnam (CAAV) and competent agencies to assess its fleet expansion plan, while taking into account the aviation market’s growth until 2030, the capacity of existing airports, and the availability of the CAAV’s aviation safety monitoring personnel, the ministry elaborated.

The transport ministry also requested the airline to prove its aircraft operating personnel and ability to ensure security and safety.

If all done right, the ministry will forward Bamboo Airways’ proposal to the Prime Minister for final decision.

But Vietnam’s youngest air carrier seems to have little to worry.

Vietnam now has five airlines, which are forecast to operate a combined fleet of 340 jets by 2023, doubling the current figure, according to the government’s development planning for the aviation sector.

National flag carrier Vietnam Airlines and low-cost Jetstar Pacific plan to increase their fleets to 155-160 planes, and no-frills Vietjet expects to have 102-106 more jets by 2023.

This means any carrier other than these three airlines are allowed to expand their fleets by 74-83 planes, a huge room compared to the 20 planes desired by Bamboo Airways.

The carrier also affirmed that it has ensured a 100-percent rate of aviation safety on all its flights while its punctuality rate reached over 95.2 percent.

Bamboo Airways operated 6,606 flights, carrying 800,000 passengers, in the past six months with an average occupancy rate of 80-90 percent each flight, the company said it a report.