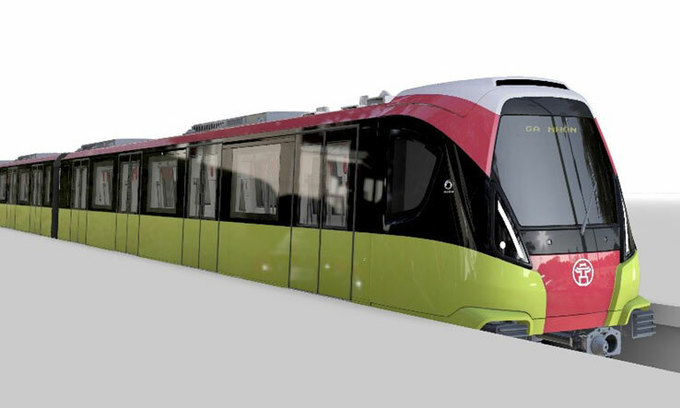 An artist’s impression of the Nhon-Hanoi Railway Station metro train. Photo courtesy of the Hanoi Metropolitan Railway Management Board.

The arrival of the first train for Hanoi’s second metro line has been delayed to next July, instead of March, as previously announced.

Designing and constructing the 10 trains for the Nhon-Hanoi Railway Station route is now 34.4 percent completed, according to a new report of the Hanoi Metropolitan Railway Management Board (MRB).

The MRB is pushing the French contractor to speed up work so that the trains can start running in April 2021 on the elevated tracks. Work on the tracks is 99.5 percent complete.

The trains will have a maximum speed of 80 kilometers per hour (kph), but will operate at an average speed of 35 kph.

MRB has said that 35 kph is faster than the capital’s public buses’ speed of 16-18 kph and Hanoi Bud Rapid Transit (BRT) of 23 kph.

The MRB last month began moving and cutting down trees near the Hanoi Railway Station downtown to make area for an underground station.

It will run 8.5 kilometers on elevated tracks through eight stations and the remaining four kilometers underground. The underground track is scheduled to begin operations in 2023.

MRB has said that in the initial period, a train will arrive every five minutes, and later every two minutes.

The project has a total investment of VND36 trillion ($1.56 billion), which has been sourced from official development assistance (ODA) funds, and is now 50 percent complete.

The city said last month it would borrow $1.48 billion from ODA funds to build a new metro section in 2021.