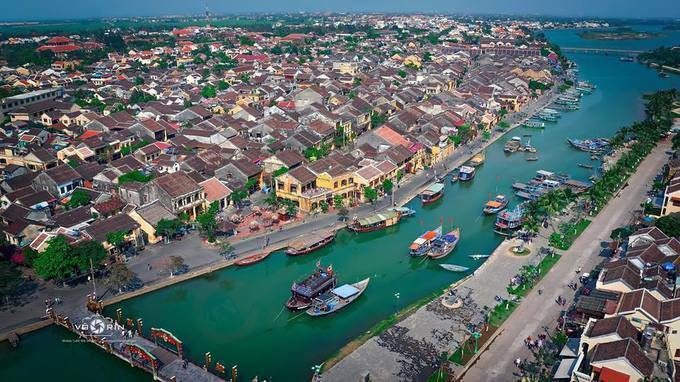 The ancient town of Hoi An is captured from above. Photo by VnExpress/Vo Rin.

The Japan Association of Travel Agents says Vietnam came in fifth on the list of top 10 summer destinations for Japanese tourists.

Besides Vietnam, Thailand and Singapore are the only Southeast Asian representatives to enter the top five, with the former securing the third place and the latter in fourth.

The JATA survey, released early this month, polled more than 300 travel companies around the world to find travel trends among Japanese holiday-goers this summer.

The U.S.’s Hawaii topped the list. The rest of the top 10 were Hong Kong, South Korea, Guam Island in the U.S., the Philippines and mainland China.

Japan is third largest source of market for Vietnamese tourism, after China and South Korea. Last year, Vietnam received more than 820,000 Japanese tourists, up 3.6 percent from a year ago.

The Japan National Tourism Organization (JNTO) has reported that the number of Japanese overseas travelers in the January-April period this year jumped by 10 percent from a year ago to 6.53 million.

The boom in Japanese tourist arrivals in Vietnam in recent years has prompted Vietnamese carriers to open direct flights connecting the country’s major cities with Japan.

In 2017, budget air carrier Jetstar Pacific opened two direct flights connecting Hanoi and Da Nang to Osaka, one of the most famous tourist cities in Japan.

Foreign tourists in Vietnam during the first six months of this year reached 8.5 million, up 7.5 percent year-on-year, according to the General Statistics Office.

Many travel agencies have said that Vietnam should further relax its visa policies and simplify procedures to attract high spending tourists from Japan, North America, Northern Europe, China and South Korea. They have called for the current 15-day visa exemption extended to 30 days.