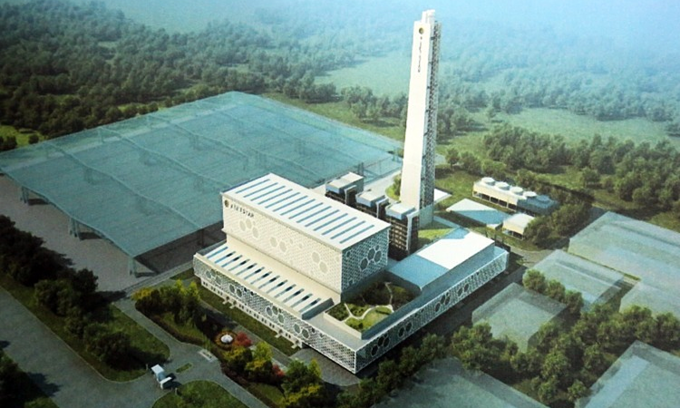 The design of a Saigon plant that is set to begin producing electricity from waste in 2020. Photo by VnExpress.

HCMC has approved the construction of two plants that will start producing electricity from waste in the next two years.

Work on the plants, Vietstar and Tam Sinh Nghia, would start in August and October in Cu Chi District, the city Department of Natural Resources and Environment said on Monday.

Vietstar will begin operation by the end of next year with a daily processing capacity of 2,000 tons of waste in the first phase. It will double in the second, to be completed in 2021.

CEO Ngo Nhu Hung Viet said the plant would use technology from German waste management company Martin. The closed system is entirely automated, does not emit odors or require trash to be sorted at source, he said.

Since it would be built inside an existing waste treatment complex, it would be quick, he added.

Tam Sinh Nghia’s plant will have the same daily capacity of 2,000 tons of waste. The 40-megawatt plant is scheduled to begin operation in August 2021, when it would also produce 200 tons of unbaked bricks daily.

Statistics from the department show that the city collected more than 9,200 tons of waste every day.

Most of it is buried in landfills, causing pollution and the stench to spread to nearby residential areas.

The city aims to reduce the landfill rate by 50 percent by 2020. It has also instructed waste treatment plants to start generating electricity. An estimated 98 MW could be produced in 2020 and 2021, increasing to 198 MW by 2030.

City authorities are soliciting investment in power plants in five unused landfills in outlying districts: three at Phuoc Hiep in Cu Chi District and one each at Go Cat in Binh Tan District and Dong Thanh in Hoc Mon district.

It is offering investors several incentives like waiver of land rent for 11 years or a 70 percent discount on it, interest-free loans and waiver of import tax on equipment.