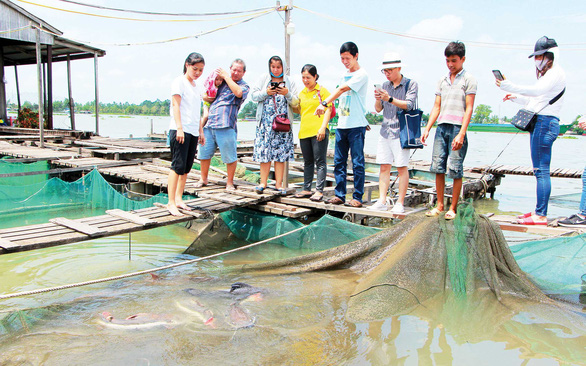 Located in the heart of the Hau (Back) River in Vietnam’s Mekong Delta region, Con Son in Binh Thuy District, Can Tho City is not only an oasis that still retains the ‘countryside’ vibes in the city, it also keeps visitors coming back by offering unique community tourism services, combined with the preservation and protection of a green, clean, and beautiful environment.

About 6km from the Can Tho center, Con Son has an area of ​​more than 67ha and the people there mainly make a living by gardening, growing vegetables, planting fruit trees, and farming fish.

With the sedimentation of the alluvial Hau River, this is one of the five islet areas in Can Tho that have a favorable position to develop eco-tourism of a rural nature.

What interests many tourists who come to this place is a clean environment. In partucular, plastic waste is rarely seen at this resort.

This is the result of a project to discourage the Con Son people from using plastic bags in tourism development.

As one of the households participating in this project, Phan Kim Ngan – the owner of Cong Minh Garden, specialized in making folk cakes to service tourists – said that she uses materials typical of rural areas such as bamboo baskets, bamboo sieves, lotus leaves, lotus flowers, and banana leaves to produce and decorate the cakes.

When going to the market, Ngan also prefers banana leaves or bags made of environmentally friendly materials to contain food.

“When tourists visit us, in addition to dedicated service, we still tell our guests to limit the use of plastic bags,” she said.

“Doing so, we can better manage and classify waste sources, so we can burn some and feed others to our fish. It is not wasteful and it does not affect the surrounding environment either.”

In order to raise fish for high yields and serving customers, Bay Bon must pick up the trash himself every day and night.

“One day I collected a lot of plastic bags and bottles floating on my family’s fish rafts. It was a huge volume,” he said.

“I cannot calculate but only know that each month I collect about VND2 million [US$86] in sales of garbage such as plastic bags and bottles.

“I place trash bins on my rafts so guests carrying plastic bags can put them there instead of throwing them into the river.”

Le Minh Luan, a tourist from District 3, Ho Chi Minh City, told Tuoi Tre (Youth) newspaper that this is the second time he and his friends and family have come to rest in Con Son because he really likes they way the locals offer community tourism services here.

“Community tourism is omnipresent, but I choose Con Son because here in addition to the enthusiasm and hospitality of the people, we can also enjoy the pure atmosphere and rustic landscape,” Luan said.

Huynh Tong Thong, a visitor from the Mekong Delta province of Soc Trang, said that when a friend asked him to find a place to bring his students to experience the countryside vibes, he recommended Con Son right away because the young would easily find a rural lifestyle here.

“They can make their own cakes, pack the cakes, or catch fish here,” Thong said.

“It’s a great way for the students to see first-hand how people live in the countryside.”

In addition to the indigenous people ‘struggling together,’ it is necessary to mention the inspirer Le Thi Be Bay, chief of the project to dissuade the Con Son residents from using plastic bags, as the person to help earn a reputation for the islet.

Bay modestly said that Ngoc Tran and Kim Loi, both Con Son dwellers, first paved the way for the development of local tourism in 2014, introducing rural specialties such as fruit and folk cakes to visitors.

She joined them and formulated a plan to spur Con Son’s community tourism up until now.

A former cultural officer, Bay learned about how other places offer tourism services, then selected the idea of ​​tourism from 36 streets and wards in Hanoi, and connect community tourism packages in a chain in order to meet the diverse needs of travelers.

The most challenging aspect of the community tourism packages was dividing work among the participants, for instance Bay would steer boats to pick up tourists, Bon, the fish raft owner, would take the tourists around his fish ponds, gardeners such as Lady Tam would serve vegetables, Chin Nho would cook frogs, Nam Phuoc would offer big fish and crab hotpots, while Bay Muon would make folk cakes.

The number of participating households has surged to 37 from the initial seven, Bay said.

“Everyone works for the collective interests so they have cooperated with one aother very well,” she added.

Bay is also encouraging the participating households to use biodegradable bags to phase out plastic bags and bottles.

Pham Nguyen Cam Thanh, a volunteer in the garbage collection team at the Con Son community tourism site, said her team numbers about 20 people, who are in charge of guiding local tour groups and collecting garbage two days a week.

The team members usually walk around the islet to do the clean-up, after which they would cut lotus leaves and banna leaves for the households to decorate their places and wrap food.

“We have collected garbage for over a year,” Thanh said.

“We and the tourists both feel happy seeing clean countryside roads here.”