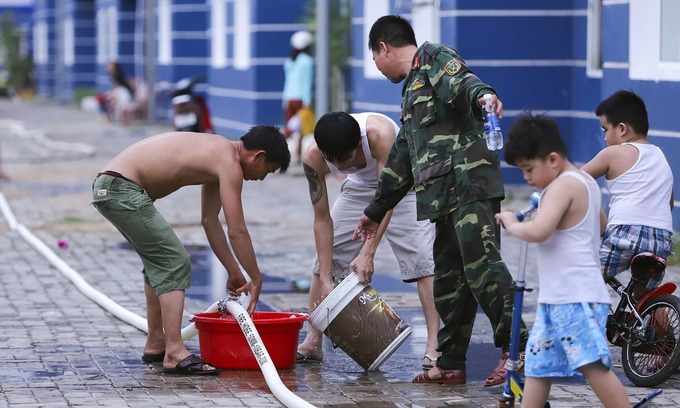 Some hotels in Da Nang, a top holiday destination in Vietnam, are unable to accept bookings because they do not have enough potable water.

High salinity levels in the Cau Do (Red Bridge) River, the main source of fresh water for a million residents and tourists in Da Nang, have meant that the city can meet 70 percent of its fresh water needs.

Doan Minh Thien, the owner of a condotel in Son Tra, home to several popular tourist hotspots in Da Nang, said he has received many complaints from visitors over the water scarcity.

“We have stopped receiving room bookings since we are concerned about the water shortage. If customers accept the problem, we can lower our charges,” Thien said.

The Sea Side Hotel in Son Tra District has prepared a 50-cubic-meter storage tank to serve tourists. “Our storage tank is always kept full so that we can meet the daily needs of our guests,” said a hotel representative.

Huu Khanh, who runs a homestay in Ngu Hanh Son District, said that his accommodation was in an area with low population density, so there was no serious water shortage, for now.

“The weak water flow has been going on for over four months now. But guests are still using water normally,” Khanh said.

According to a survey by VnExpress, a number of hotels in water shortage hit districts are still accepting bookings from customers for the three-day holiday that marks Vietnam’s Independence Day (September 2) this year. The holiday starts next Saturday (August 31).

The reservation staff of a hotel on Vo Van Kiet Street in Da Nang told VnExpress that the shortage situation will improve soon, and will not affect the upcoming holiday. Rooms in the area cost around VND800,000 ($34) and a 30 percent surcharge applies during major holidays.

The city’s Department of Natural Resources and Environment said salinity in the Cau Do River rose from 2,000 mg per liter to 4,474 mg per liter between February and August, and the Cau Do water plant could not pump water from the river for its potable water supply system.

Da Nang’s water supply has been declining in recent years, as a result of forest destruction, low rainfall and the operation of hydropower plants, officials have said.

Many people have raised concerns that if the problem is not solved, it will badly affect the tourism sector of the third major city, after Ho Chi Minh City and Hanoi.

Once a sleepy fishing town, Da Nang is now a formidable tourism destination, gaining renown for its beautiful, long beaches and upscale resorts.

Da Nang, home to Asia’s most beautiful beach My Khe and next door to the UNESCO heritage site Hoi An ancient town, received 1.9 million foreign tourist arrivals in the first seven months of this year, up 11.2 percent year-on-year.

South Korea, mainland China, Japan and Hong Kong are the four groups of foreign visitors with the highest growth rates in the central city.