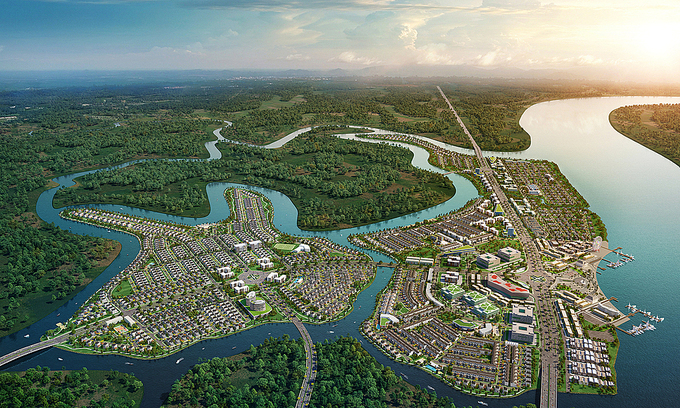 An aerial view of a satellite urban area project in the southern province of Dong Nai. Photo courtesy of Aqua City.

Real estate giants are gobbling up huge areas of land in HCMC’s neighboring localities like Binh Duong and Long An for mega projects.

A recent survey by VnExpress found that these companies have pocketed hundreds and even thousands of hectares in satellite urban areas in several provinces as of mid-June.

From 2018 until June this year, an average enterprise in Saigon holds at least two to three projects in satellite urban areas, according to the latest report of Ho Chi Minh City-based real estate firm Ngoc Chau A.

While their land purchase in the main market, HCMC, is limited to a few dozen hectares, the giants are focusing on huge projects in the southern provinces of Binh Duong, Dong Nai, Long An and Ba Ria – Vung Tau, and even in central provinces or northern cities.

Novaland, a real estate developer with a huge market share of residential houses in Saigon over the past decade, has been one of the early birds in the new trend, launching its business strategy to expand to provinces surrounding big cities since 2018. As of June, it has invested in at least four projects spanning thousands of hectares in Binh Thuan, Dong Nai, and Ba Ria – Vung Tau provinces.

Nam Long, a real estate giant that has led the affordable housing market over the past two decades, is also opening a large urban agglomerations. This year, the company is focused on developing the first phase of urban area Waterpoint in Long An, which covers 55 hectares.

Despite having a land bank of 681 hectares across several provinces and cities, Nam Long still spends VND2 trillion ($86 million) per year on more land. The acquisition criteria of this company is that the land must be large in scale and belong to satellite urban areas of provinces or cities, or be located at the gateway of key economic regions in the southern or northern region.

At present, the company is preparing to develop satellite communities in Long An, Dong Nai and Hai Phong.

Saigon real estate developer Hung Thinh has also been developing projects in Dong Nai, Binh Dinh and Ba Ria-Vung Tau in recent years. On average, from 2018, this firm has been launching at least one new project in the satellite urban areas a year and putting them on sale.

According to Ngoc Chau A’s latest report, from 2018 until June this year, a real estate enterprise in HCMC holds at least two to three projects in satellite urban areas on average.

Ngoc Chau A said that trend started in 2018, but by 2020 the speed of the “big migration strategy” will get faster and bigger. It will also create stronger waves in the coming decades as the new projects can take 5-10 years to develop and even longer.

Nguyen Thanh Huong, general director of the Dai Phuc real-estate firm based in HCMC’s Binh Thanh District, said that the trend of moving away from HCMC and investing in satellite urban areas has developed strongly among the city’s real estate companies over the past three years and is set to intensify further in 2020.

Huong said there are many reasons for this “outward migration.”

This strategy was an inevitable trend in the context of land in HCMC becoming increasingly scarce. Over the past two years legal procedure in the city have become “congested,” resulting in prolonged investment periods and huge financial costs.

Land in HCMC has also become more expensive after consecutive “land fevers” between 2016 and 2018, prompting businesses to expand to surrounding areas and even farther to acquire land at more affordable prices, she said.

The strong investment in and development of inter-regional infrastructure in adjacent provinces and satellites urban areas near HCMC is also a big boost for the outward real estate movement.

“Investing in satellite urban communities of Saigon is a vital strategy for businesses to expand land acquisition at a low price, easily create products with competitive prices and promote market share in neighboring areas,” she said.

She added that because the nearby provinces adjacent to HCMC still have large land areas at relatively low costs, investors have more convenient conditions to develop large-scale projects, promising localities they can create mega-cities and make positive contributions to local socio-economic development.

However, Huong also pointed out this trend is not without its drawbacks, including inadequate transport infrastructure, slow development of facilities for settling in and a paucity of jobs that make it difficult to attract residents.