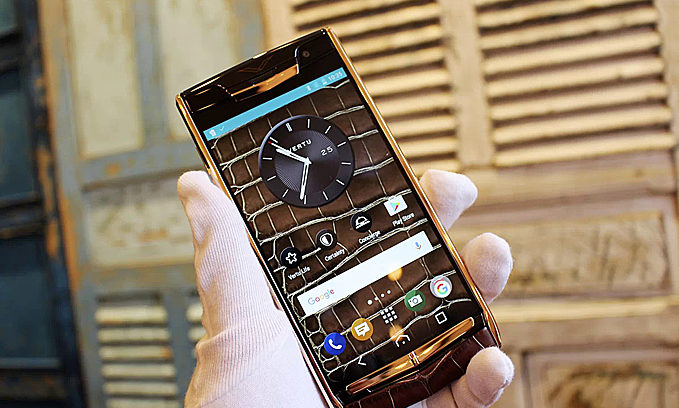 A Vertu New Signature Touch – The Floating Seahorse model being held up. Photo acquired by VnExpress.

After a two-year hiatus, British luxury phone maker Vertu has announced resumption of sales at its Ho Chi Minh City store next month.

Vertu Vietnam, a local unit of the phone maker, said genuine Vertu phones will once again be sold in Vietnam, first from an District 1 outlet in Ho Chi Minh City in October, then a Hanoi outlet the following month.

Vertu luxury cell phones had been sold in Vietnam since 2006 by electronics distributor FPT Trading, formerly known as FPT Telecom Products Distribution Co., Ltd., through three outlets in Vietnam. In late 2017, the stores closed after Vertu ceased production in the U.K.

The company had filed for bankruptcy in its home country, having racked up debts of some £138 million, but its business was still thriving in Vietnam.

A representative of FPT Trading said that when Vertu’s U.K. factory was shut down, customers in Vietnam were still ordering its super-luxury phones.

Vertu will now distribute its phones through Vertu Vietnam, a Hanoi headquartered company established in May 2019.

Before Vertu announced its return to Vietnam, traders had observed that demand for Vertu handsets in the country had never died down.

“Normally, we rarely see Vertu phones, but in events or places with lots of rich people, you can find 80-90 percent of them using them. For them, the latest technology is not a top priority. They use Vertu because of the phone’s anti-tapping protection features, the brand name and the fact it is crafted from luxury materials,” said Nguyen Phi Dung, a dealer in luxury hand-carried Vertu phones.

Vertu was founded by Finnish phone-maker Nokia in 1998, but changed hands several times later. In 2012, it was sold to Swedish investment corporation EQT; and in 2015 to Hong-Kong based investment fund Godin Holdings.

In March 2017, Vertu was sold to Baferton Ltd., owned by Turkish businessman Hakan Uzan. However, just four months later, Uzan had to close Vertu’s U.K. factories, having failed to save it from bankruptcy.

However, in October last year, Vertu made an unexpected return to China with a new Aster P, priced at $5,167 for black and white models, and $14,146 for its yellow model.