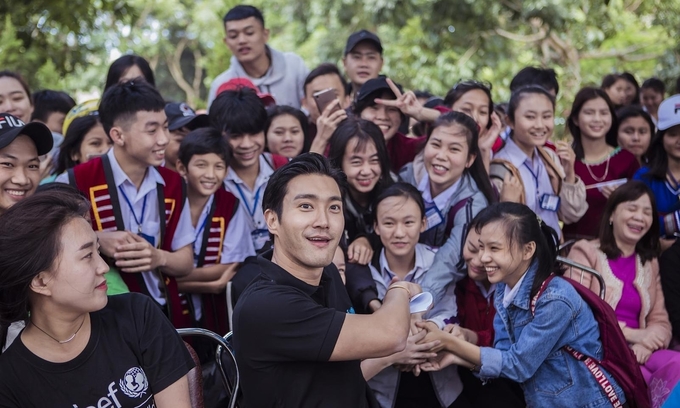 Siwon Choi, a member of Korean boy band Super Junior, will join a UNICEF campaign against child bullying in Vietnam.

UNICEF’s #StopBullying mission, announced Tuesday, aims to raise awareness of young people and engage them on how to develop solutions to end the problem.

“Bullying is so common that it’s viewed as almost ‘normal’, but it should never be. Bullying will eventually end if we all decide to stop it. Children should speak out and take action to support each other to end bullying,” Choi said.

Choi will visit Vietnam on October 2 to join the campaign, Louis Vigneault-Dubois, UNICEF Vietnam’s Chief of Communication and Advocacy, said.

The 33-year-old celebrity visited Vietnam in 2017 and 2018 to promote a three-year UNICEF project providing music lessons.

The project, funded by South Korean entertainment company SM Entertainment, has provided over 6,500 students in the central city of Da Nang and Central Highlands province of Kon Tum with music lessons, instruments and other classroom equipment.

K-pop’s international popularity fan has grown enormously in recent years, and Vietnam is not an exception. UNICEF Vietnam said it is hoping to use Choi’s influence and popularity to get the message across about ending bullying at schools.

This year, Choi will be accompanied by actor Park Jaemin.

On October 2, the artists will have a discussion with school children in Da Nang about bullying and the form of support they need from peers, caregivers, teachers, school personnel, and the community to feel safe.

The talk will be followed by a concert performed by 50 children on stage, including those with disabilities. The performance aims to show how music provides opportunities for children to find their talent and to grow their ability to express themselves in different ways, said Vigneault-Dubois.

“Bullying in schools undermines children’s confidence, their self-esteem, their education, their long-term mental health – and where we fail to stop bullying, we condone violence and we fail to give children the negotiation and conflict resolution skills that are so important for their future,” said Rana Flowers, UNICEF Vietnam’s Country Representative.