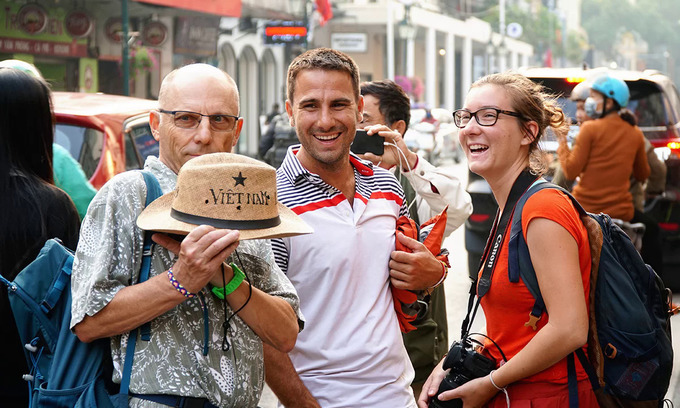 A group of French tourists visit the capital of Hanoi in February, 2019. Photo by VnExpress/Phong Vinh.

Hanoi is in 15th position and Ho Chi Minh City in 18th among Mastercard’s top 20 Asia-Pacific destinations for international travelers this year.

Mastercard ranked 161 cities in the Asia-Pacific based on the number of overnight international arrivals and travel spending, using data primarily from national tourism boards.

Last year Hanoi received 4.8 million overnight international visitors, who stayed for 3.8 days on average while the southern metropolis had 4.1 million arrivals who stayed for 5.3 days, according to the annual Asia Pacific Destinations Index drawn up by the U.S. payment company, released last Friday.

The top five destinations in the list were Bangkok, Singapore, Kuala Lumpur, Tokyo, and Seoul, welcoming over one-fifth, or 22 percent of all overnight visitors to the region’s top 161 cities and regional centers in 2018.

During the period spending by travellers grew by 10.2 percent to more than double from $117.6 billion to $281.1 billion.

While many Asia Pacific destinations are basking in the growth led by mainland Chinese travelers, South Korea and Japan have also emerged as major source markets, the report noted.

“While the world’s economic, geopolitical, technological and societal landscapes have all changed dramatically since Mastercard launched this research 10 years ago, one thing has remained constant: the desire of ever-growing numbers of people to explore the world beyond their own borders,” Rupert Naylor, senior vice president of Mastercard Advisors in Asia Pacific said.

Last year HCMC and Hanoi were among the world’s 100 most visited travel destinations, a Euromonitor International report said.