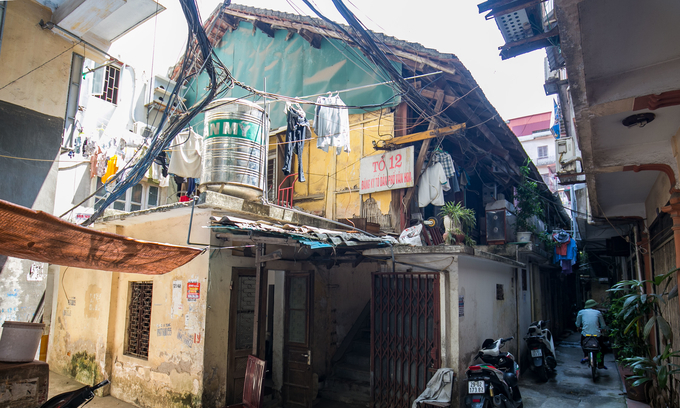 An ancient apartment block in downtown Hanoi looks like it might collapse any time, but its occupants just live with the risk.

Bao has been living in this small, dingy place on Ham Tu Quan Street, Hoan Kiem District, for 40 years. He says it was built in the 1950s for Ministry of Education employees, and its two floors have 24 apartments measuring 10-25 square meters each.

Half a century later the place, that was once a dream for many people in an era of deprivation due to wars, have virtually become slums. People live in extremely cramped spaces, and the haphazard extensions and renovations done over the years only emphasize its crumbling nature today.

Most people living here could not afford a proper house and so bought a unit here at very cheap prices. The initial design was too open with several flats sharing a toilet and other amenities. Households had to cook their food in the little space they have in front. Charcoal stoves are common.

Over the years many of the original occupants moved out, fearing for their own safety, renting it out to poor people from other localities who could not afford anything else.

The few families that have stayed on for three or four generations, like Bao and Thom’s, have seen living conditions deteriorate. They now live on the second floor with five children and grandchildren. Thom was a worker in the Ministry of Education and got the apartment in the late 1970s.

Seven people of three generations live in a 20-square-meter home. The couple live with their oldest son, his wife and two kids. Bao’s other son is currently in college. Because of their low pensions, they cannot move elsewhere.

When it rains, water leaks everywhere and the family uses plastic bags and metal bowls to catch it.

The steps in the old wooden stairs are starting to decay but replacing them will cost VND1 million ($43), and no one has that money. Every time somebody steps on the stairs, they make a creepy creaky noise. Strangers stepping on the stairs do so gingerly, fearful they can collapse at anytime.

Bao says: “This is worse than a slum. But we have to keep everything here because we don’t have the money to buy new things.”

The repairs done over the years include reinforcing the walls with cement and the tiled roof with metal poles.

The complex is overrun by rats, which scurry around noisily outside at night. The electrical wiring is also a problem, and families live in constant fear of fires breaking out. All important papers and documents are wrapped carefully and stored in the pantry.

Nearly 20 such residential complexes were built in the late 1950s and 1960s by the government. Many of them have had to be rebuilt, some have been destroyed by fires. In 2012 an apartment block with 36 households was completely gutted and one person died.

After that the government announced plans to rebuild these apartments, but not much has been done so far and people continue to live in apprehension.