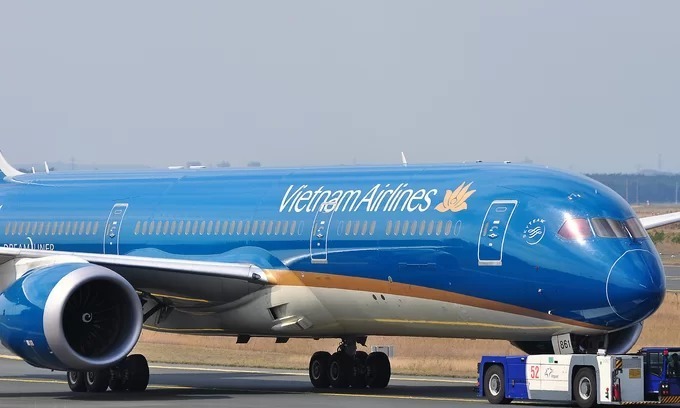 Due to the approaching Typhoon Bailu, Vietnam Airlines cancels or adjusts some flights scheduled from HCMC and Hanoi to Taiwan’s Kaohsiung City over the weekend. Photo by Shutterstock/anvu.

Vietnam Airlines has canceled its weekend flights to Kaohsiung City as Typhoon Bailu is forecast to make landfall in Taiwan Saturday.

The national flag carrier said in a statement Friday that two flights scheduled to leave Ho Chi Minh City for Kaohsiung on Saturday, August 24 have been canceled for safety reasons after warnings have been issued about floods and high seas on the island.

It also rescheduled two other flights that were to depart from Hanoi to Kaohsiung on Sunday morning, August 25.

For those affected by flight cancelations on Saturday, the airline will arrange extra seats on Sunday flights.

Passengers have been advised to stay updated on the status of their flights. They have also been asked to keep track of weather conditions and announcements from the carrier in making their travel plans.

By 7 p.m. Friday, the center of the storm was situated 520 kilometers southeast of Taitung and moving at a speed of 25 km per hour towards the northwest, carrying wind speeds of up to 126 km per hour.

The storm is expected to make landfall in Hualien or Taitung County on the east coast Saturday, Taiwan News reported.

Thousands of people have been moved to safety, most of them tourists on islands off the east coast, while dozens of domestic flights and ferry services were cancelled. Some 34,000 soldiers were deployed in the south amid fears of floods, AFP reported.

With increasing numbers of people opting to fly, Vietnam’s aviation industry has served more than 56.8 million air passengers in the first half of this year, 8.4 percent up from a year ago, according to the Civil Aviation Authority of Vietnam.