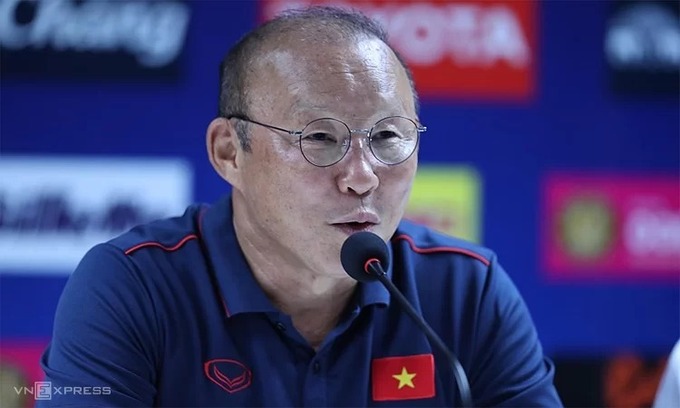 Vietnam’s head coach Park Hang-seo thinks the pressure to win is greater on Thailand and will make Thursday’s clash a tough one.

“As a coach, I have certain pressures before each game, especially this World Cup qualification game with Thailand. But I have got used to this because I have been in many tournaments before,” Park said at a pre-match conference in Thammasat Stadium, Thailand, Wednesday.

He said he felt that the pressure to win will make things difficult for Thailand despite their preparations.

“I know Thailand have prepared carefully for this game. They have a new coach, but I think that this will be a challenging match for them, since they must win this game.”

Park said his players have had a great preparation and they will continue showing their spirit.

At the last encounter between the two teams, Vietnam beat Thailand 1-0 at the King’s Cup 2019 in June. Park said that although it was a small game, it had boosted the players’ confidence.

“In the past, Vietnam used to get bad results against Thailand. So that game can be considered as a transition. From now, the players will be more confident, not just for this game but also future clashes with Thailand,” Park said.

Thailand coach Akira Nishino broke his previous silence on Vietnam, saying: “Vietnam is a strong opponent. I know that they have made great improvements over the last few years and Thailand are facing some pressure before the game. But we will try to turn that pressure into motivation to play well. We are ready,” Nishino said.

“We’ve had 10 days to prepare for this game. Everything is ready at the moment and we all feel comfortable. In football, it’s hard to avoid collisions. The Vietnamese players won’t hesitate to make contact and they will prove their determination in the game,” Hai said.

Thailand were once the undisputed number one team in Southeast Asian football. But in the past few years, Vietnam has changed that with the Golden Dragons achieving impressive results in tournaments like the Asian Games, AFF Cup and the Asian Cup.

Vietnam has beaten Thailand at many levels since Park took over its reins. The U23 team beat Thailand 2-1 and 4-0 in their last two encounters.

The World Cup qualification match between Thailand and Vietnam will take place 7 p.m. on Thursday at the Thammasat University Stadium in Pathum Thani, Thailand, which has a capacity of 25,000. VnExpress will report the match live.