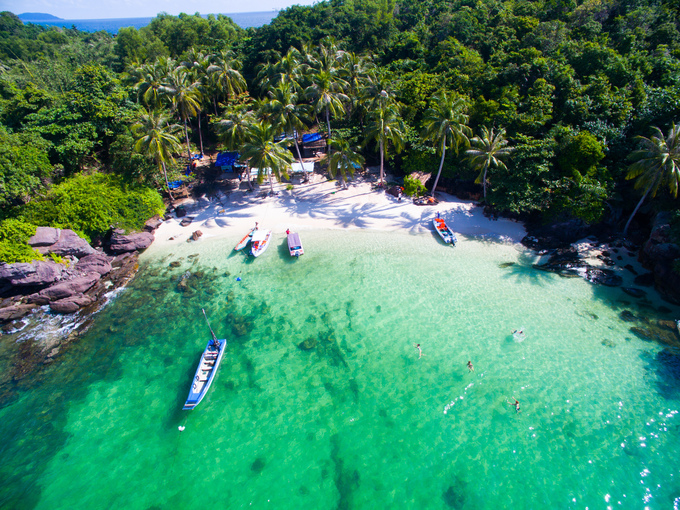 Mong Tay Islet is one of the few places left in Phu Quoc that remain pristine and inhabited. Photo by Shutterstock/daoanh.
Places

Mong Tay Islet is one of the few places left in Phu Quoc that remain pristine and inhabited. Photo by Shutterstock/daoanh.

Two well-known travel bloggers from Kuwait are exploring Vietnam in a campaign to woo big spenders from the Western Asian nation.

Fatima Al-Mattar, who has more than 110,000 followers on Instagram, and Sulaiman Roudan with over 40,000 followers have joined a two-week field trip starting last Friday to explore famous tourist attractions in Vietnam, including Hanoi and Sa Pa in the northern highlands, Ha Long Bay in the north, Da Nang and Hoi An in central Vietnam, and Phu Quoc Island and Ho Chi Minh City in the south.

The field trip, organized by the Vietnamese embassy in Kuwait, is part of efforts to boost the popularity of Vietnam in Kuwait and the Middle East region, which has some high-spending tourism markets.

Travel spending by Middle Eastern tourists is higher compared to Asian and European visitors despite being lower in arrival numbers, industry insiders said.

“With real travel experiences in Vietnam, the travel bloggers will share photos and videos on Instagram, the world’s largest photo sharing network, and the Snapchat social media platform to broadcast the country’s images to their followers,” said Trinh Minh Manh, Vietnamese Ambassador to Kuwait.

This is the second time the embassy has invited travel bloggers from Kuwait to Vietnam. Kuwaitis mainly use Instagram and rarely surf on Facebook, the world’s biggest social network.

According to official statistics, Kuwaitis’ total spending on global travel increased 17.6 percent year-on-year in 2018, when they spent $13.9 billion.

A World Tourism Organization (UNWTO) study has estimated that Kuwaitis annually spend 11 percent of their income on tourism, travelling and recreation, the highest in Gulf Cooperation Council states, which also include Saudi Arabia, the United Arab Emirates, Qatar, Bahrain and Oman.

Other Southeast Asian countries like Thailand, Malaysia and Indonesia have done a good job of attracting high-spending tourists from Kuwait.

While Vietnam is the midst of a tourism boom with a record high of 15.5 million foreign arrivals in 2018, a year-on-year rise of 20 percent, the numbers remained lower than that of neighboring countries in the region.

Many Vietnamese tourism agencies want the country to further relax its visa policies and simplify procedures to attract high-spending tourists from Japan, the Middle East, North America, Northern Europe, China and South Korea. The current 15-day visa exemption for several countries should be extended to 30 days, they said.