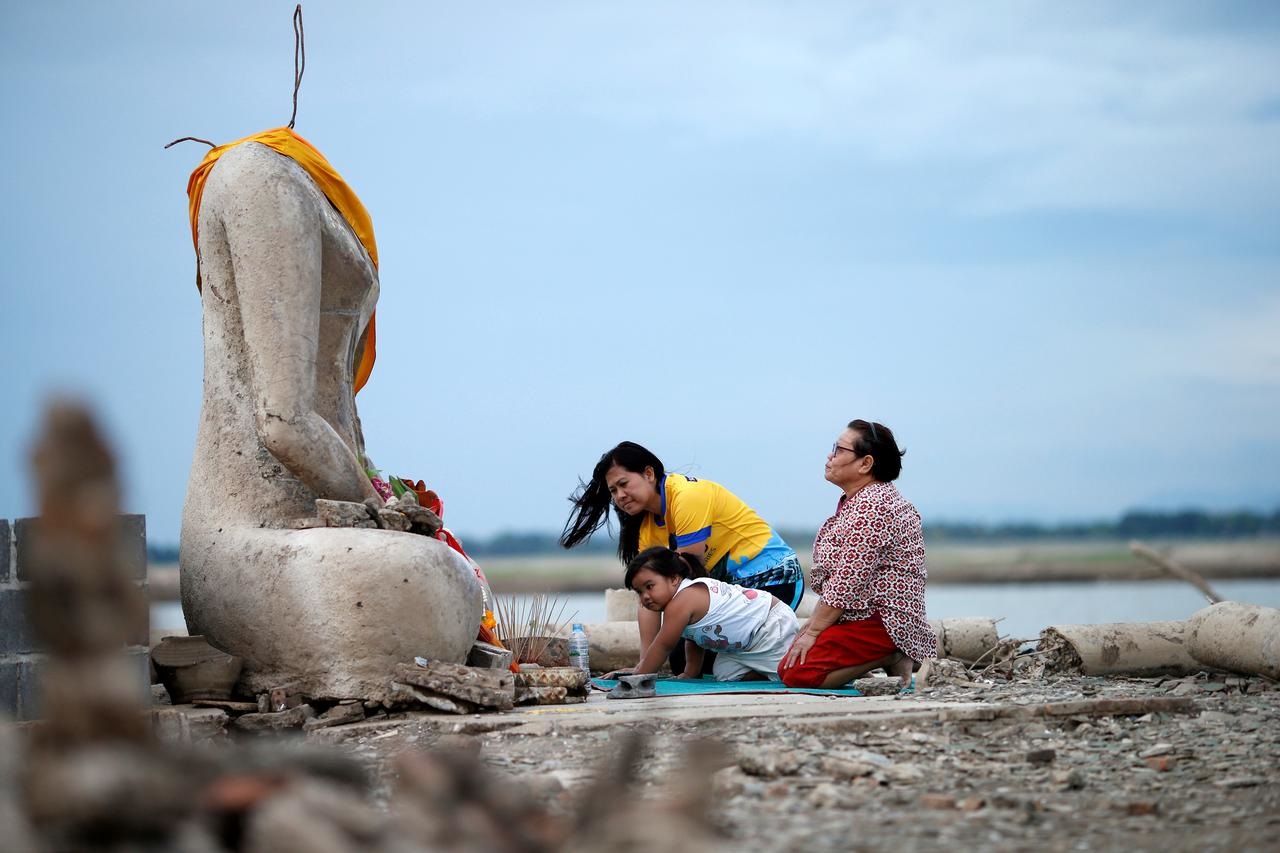 A family prays near the ruins of a headless Buddha statue, which has resurfaced in a dried-up dam due to drought, in Lopburi, Thailand August 1, 2019. Picture taken August 1, 2019. Photo: Reuters

OPBURI, Thailand — Thousands are flocking to see a Buddhist temple in central Thailand exposed after drought drove water levels to record lows in a dam reservoir where it had been submerged.

As the reservoir reaches less than 3% of capacity, the remains of Wat Nong Bua Yai, a modern temple submerged during construction of the dam 20 years ago, have became visible in the middle of dry ground.

Some Buddhist monks were among the hundreds of people who walked through broken temple structures on cracked earth littered with dead fish last week to pay respects to a headless 4-metre (13-feet) -tall Buddha statue, adorning it with flowers.

“The temple is normally covered by water. In the rainy season you don’t see anything,” said one of the visitors, Somchai Ornchawiang, a 67-year-old retired teacher.

He regretted the temple flooding but is now worried about the damage the drought is causing to farmland, he added.

The dam, with capacity of 960 million cubic meters, normally irrigates more than 1.3 million acres (526,000 hectares)of farmland in four provinces, but drought has cut that to just 3,000 acres (1,214 hectares) in the single province of Lopburi.

The meteorological department says Thailand is facing its worst drought in a decade, with water levels in dams nationwide having fallen far short of the monthly average.

Yotin Lopnikorn, 38, headman of the Nong Bua village that used to be near the temple, recalls visiting it with friends as a child, before dam construction forced the villagers out.

“When I was young, I always came to meet friends at the elephant sculptures in front of the main building to play there,” Yotin said.

At the time, the temple was the centre of the community, used to conduct rituals, festivities and educational activities, besides functioning as a playground and recreational area.

Next to the temple compound are the remains of 700 households of the village.

The ruins have reappeared before, after a drought in 2015.

“This is the second time I have seen this temple in this condition,” said Yotin. “Now I think we need to save this place.”