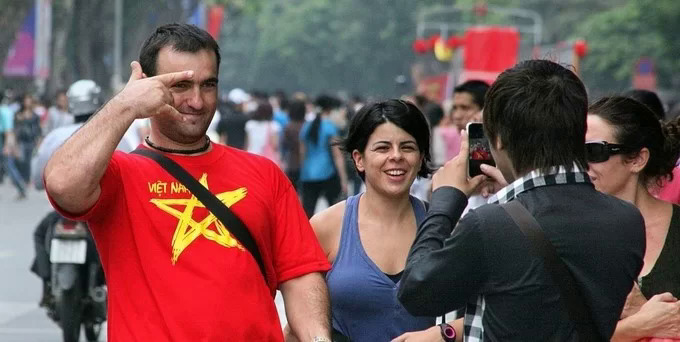 A man takes a photo of a foreign couple in Hanoi. Photo by VnExpress/Vu Dung Pham.

Vietnam’s tourism industry anticipates robust growth in Indian visitors as the first ever direct flights between the two countries will take off next month.

Randir Brar, a representative from travel agency Destinos India, told VnExpress International that the number of Indian visitors to Vietnam could see a big surge following the launch of direct flights.

“The direct air routes will help cut traveling time between the two countries from 15 to six hours, making it easier for more Indians to travel to Vietnam and contribute to bilateral tourism,” he added.

India, with the second largest population in the world only after China, is considered one of the most promising tourism markets. Every year, around 25 million Indian tourists travel abroad and the figure has been rising in recent years, according to India’s tourism ministry.

Currently, flights from Vietnam to India and vice versa have to transit in other countries. Vietnamese Ambassador to India, Pham Sanh Chau, said the long flight time, inconvenient flight routes and expensive travel costs are the main reasons for fewer Indian tourists traveling to Vietnam.

Chau said that the upcoming launch of direct flights was a great opportunity to promote bilateral tourism cooperation in the context of Vietnam looking for ways to diversify its tourism markets to reduce dependence on Chinese tourists.

Indian budget carrier Indigo plans to launch the first direct flights between Hanoi and Ho Chi Minh City to the eastern Indian city of Kolkata (formerly known as Calcutta) on October 3 and 18 respectively.

Meanwhile, Vietjet Air will become the first Vietnamese airline to launch direct air links with India. This carrier’s Ho Chi Minh City-New Delhi route is set to open on December 6, with four flights a week on Monday, Wednesday, Friday and Sunday, while the Hanoi-New Delhi route will operate from December 7 onwards with three flights a week on Tuesday, Thursday and Saturday.

Vietnam first allowed foreign tourists to apply for a visa online in February 2017, starting with 40 countries including China, South Korea and the U.S. In December that year, six countries were added to the list, including India and Australia.

The World Tourism Organization has forecast that the number of Indian tourists going abroad will reach about 50 million by 2020, making India an attractive tourism market that many countries aim to invest in, including Vietnam.

India has become a leading travel choice of Vietnamese tourists in recent years. Last year, the number of Vietnamese visiting India was more than 31,000, up 32 percent from a year ago.

India, known for the Taj Mahal, a UNESCO heritage site and one of the world’s seven wonders, is also home to famous Buddhist temples, including the place where the Buddha became enlightened, making it a favored spiritual destination for many Vietnamese. India is also a leading destination for cultural and healthcare tours.