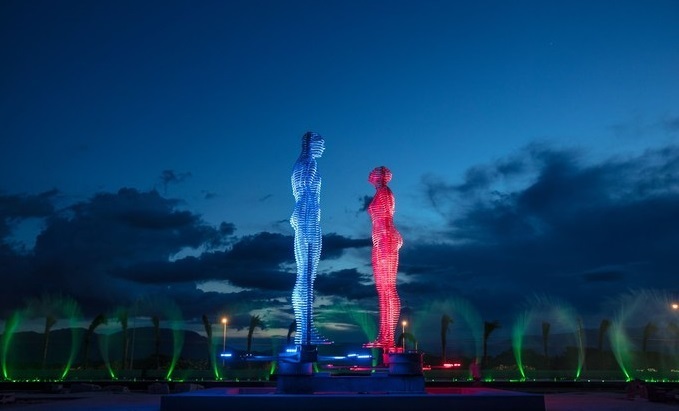 The replica of ‘Ali and Nino’ statue at The Arena condotel in Cam Ranh Port.

Khanh Hoa has installed a replica of ‘Ali and Nino’ statue at The Arena condotel in Cam Ranh Port, a value addition to its many attractions.

Deemed one of the 10 most romantic monuments in the world, the 8.5-meter metallic statue by Georgian artist Tamar Kvesitadze represents two characters in a novel by Kurban Said.

Despite coming from different faiths, Ali, a Muslim boy, and Nino, a Christian Georgian princess, fall in love as World War I draws to a close.

Ali is determined at all costs to marry Nino when she leaves school. Overcoming many ups and downs, even to the point of facing death, they get married. They have a daughter and live a happy life. But not long after, the war takes Ali’s life as he fights to protect his country. After her husband’s death, Nino returns with her daughter to Georgia but has to live, and eventually die, in captivity.

Moved by the tragic love story, artist Tamara Kvesitadze created a steel sculpture called “The Statue of Love” and placed it on the seaside on Batumi Boulevard in Georgia. Here, the statues spring to life at 7 p.m. every day, when the incarnations of Ali and Nino slowly move closer to each other for about 10 minutes, before passing and moving further apart.

A representative of the The Arena condotel said the replica will open to the public in July.

The central coastal province of Khanh Hoa is home to beach town Nha Trang, one of the country’s most popular tourism destinations, and Cam Ranh Bay.