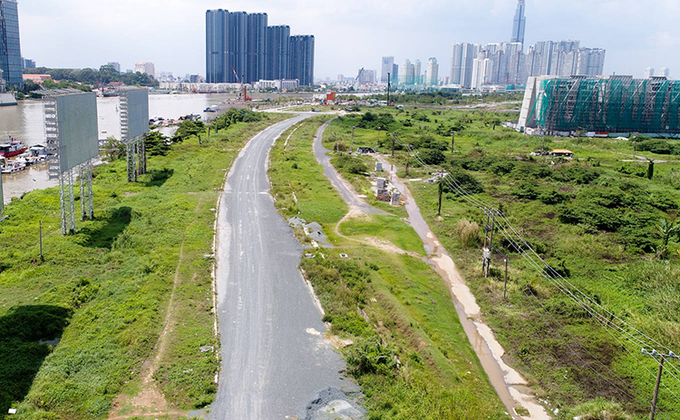 One of the four roads in Thu Thiem New Urban Area, built at the total cost of VND12 trillion ($515 million). Photo by VnExpress/Quynh Tran.

People in Ho Chi Minh City’s District 2 complain their sufferings have been ignored in a report on violations in Thu Thiem urban area development.

The Government Inspectorate on Wednesday delivered its report on the work done so far on the Thu Thiem New Urban Area in the namesake peninsula, with inspectors indicting the city government and its agencies for a series of violations.

They include wrongful award of build-transfer (BT) contracts for the megaproject’s infrastructure projects, mistakes in approving their outlays and paying in advance for them in contravention of regulations.

The report requires city authorities to take back VND26 trillion ($1.1 billion) they had wrongfully advanced and resolve the issue of trillions of dong (VND1 trillion = $43 million) incorrectly sanctioned for BT projects.

Following the issue of the report, former Thu Thiem residents’ lawsuits and complaints against the project were discussed at a meeting between local people and People’s Council members on Saturday.

Nguyen Xuan Duc of Cat Lai Ward said people in District 2 had been expecting great things from the project that has been two decades in the making. But, instead, they have had to scatter, buying or renting houses elsewhere.

“The government’s report only mentions which agencies committed violations and which organizations were involved in wrongdoing, and not the lives of people. This is a major scandal not just for District 2 but for the entire country.”

Many others concurred with him, and criticized the report for failing to talk about the “victims” of the violations.

Nguyen Thi Ha, a resident of Binh An Ward, said both reports on the Thu Thiem New Urban Area project by the Government Inspectorate have failed to mention the names of officials responsible for the violations. She wanted relevant agencies to step in and investigate the case to meet public expectations.

“The city has been committing violations for so many years. Why didn’t People’s Council members with their supervisory powers discover them?

“We need the Government Inspectorate to spell out leaders’ violations and clarify the zoning issues before  compensating the residents.”

Ha also called for a criminal investigation into authorities’ forced expropriation of 4.3 hectares (10.6 acres) of land in Binh An Ward outside the project and grant of 160 hectares of land earmarked for resettling people moved from Thu Thiem to businesses.

Pham Van Thoi of Cat Lai Ward started by apologizing to members of the public saying he used to be a representative of local authorities responsible for persuading Thu Thiem residents to move out and hand over their lands for the project. Then he angrily asked, “Where was the supervisory role of the People’s Council?

“The wrongdoing in Thu Thiem has been going on for the last 20 years, but we never saw any People’s Council member talk about it at [legislative] sessions.

“I request the People’s Council to review and compile data on how difficult the life of Thu Thiem residents forced to relocate has become.”

After two hours of listening to the grievances, Nguyen Van Hieu, chairman of the city Party Committee’s Inspection Committee, said he had taken note of all the points raised such as specifying the project’s limits, resolving complaints about the 160-hectare resettlement land and auditing the resettlement project, and promised to fully report to relevant departments and help find answers as soon as possible.

“The People’s Committee is consulting with the Party Committee to implement the Government Inspectorate’s conclusions promptly to safeguard the public’s rights and interests. We will monitor this process to report promptly to voters.”

Prior to the release of the latest report on Wednesday, the Government Inspectorate had delivered another last September with another list of violations committed by the city government and departments.

They included the expropriation of the 4.3 hectares of land in Binh An Ward outside the project limits, land acquisition and compensation payments in contravention of the Land Law and handover of resettlement lands to 51 businesses for building housing, office buildings and amusement parks, resulting in a shortage of land for resettlement and violating the plans approved by the government.

Thu Thiem residents have filed complaints and lawsuits for years, causing the project to be delayed.