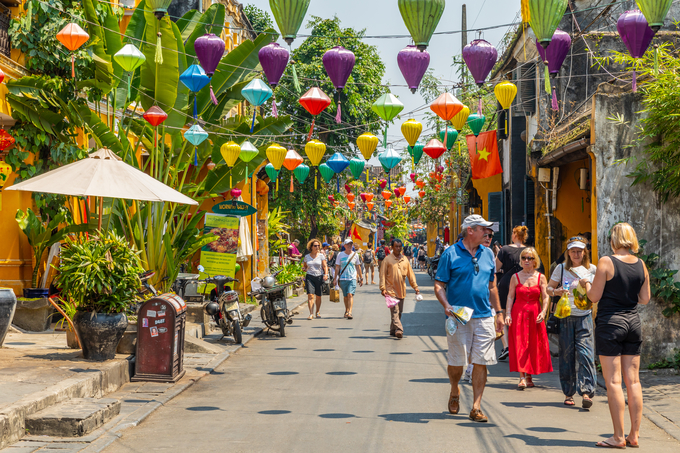 Foreign tourists walk around the ancient town of Hoi An in central Vietnam. Photo by Shutterstock/Huy Thoai.

The number of tourists from Vietnam’s top feeder market witnessed a slight decrease in H1 of 2019, while other Asian nations registered strong growth.

From January to June, Chinese arrivals to Vietnam were nearly 2.5 million, down 3.3 percent year-on-year. Despite the slight decrease, China topped the list of foreign tourists, followed by South Korea with 2.1 million arrivals.

The drop of Chinese tourists has affected the total number of international visitors to Vietnam during the period, with growth seeing a lower increase than in previous years.

Foreign tourists in Vietnam in the six-month period this year were 8.5 million, up 7.5 percent year-on-year, according to the General Statistics Office. The growth in the same period last year was 27.2 percent. Seventy percent of visitors arrived by air.

“Chinese tourism is pretty big for ASEAN now, and all the countries rely on Chinese visitors to keep coming and keep spending,” Edward Lee, an economist with Standard Chartered Plc in Singapore, was quoted as saying in the report.

Survey results released last year by the Vietnam National Administration of Tourism, show the average daily spending by a Chinese visitor in Vietnam increased from $118.6 in 2014 to $130 last year. This was below what Chinese visitors spent in Thailand ($180), Indonesia ($183) and Singapore ($446).

Nguyen Ngoc Thien, Minister of Culture, Sports and Tourism, said the country has been doing more to boost tourism promotion in China, the largest source market for Vietnam. Most countries around the world are paying a lot of attention to attracting tourists from the Chinese market, he added.

Since 2012, tourists from China have been the world’s top spender in international tourism, leading global outbound travel, South China Morning Post reported. CLSA, a Hong Kong brokerage and investment firm, predicted that more than 200 million Chinese tourists are expected to make outbound trips in 2020; and Vietnam stands to benefit, too.

Many direct flights connecting major Vietnamese major cities with China have been launched over the past years to cater to growing demand.

Chinese visitors have also been encouraged by a new policy that allows groups to visit the border province of Quang Ninh in northern Vietnam, home to the popular Ha Long Bay, for up to three days without a visa.

The Vietnamese government has also allowed Chinese nationals to apply for 30-day single-entry electronic visas for holidays and business trips.

More than 150,000 Thai nationals arrived in Vietnam in the first half of this year, posting the highest national demographic growth of 45.4 percent year-on-year, followed by Taiwan (27 percent), Indonesia (21.9 percent), South Korea (21.3 percent), the Philippines (25 percent) and Japan (12.8 percent).

Earlier this year, Bangkok Airways opened a direct route from Bangkok to Cam Ranh, an hour south of its much busier sister Nha Trang Town in the central province of Khanh Hoa.

Vietnam’s tourism revenue in the first six months of the year is estimated at VND338.2 trillion ($14.5 billion), up 8.4 percent year-on-year.

While Vietnam is the midst of a tourism boom with a record high 15.5 million foreign arrivals in 2018, a year-on-year rise of 20 percent, the numbers have remained lower than that of neighboring countries in the region. Thailand (38 million), Malaysia (25 million) and Singapore (18.5 million) remain far ahead of Vietnam.

At a National Assembly session last year Deputy Prime Minister Vuong Dinh Hue said the country needs to stop relying on crude oil and focus on tourism to sustain its economic growth. “It’s better to get one million tourists than try to find one million tons of crude oil because tourism is more eco-friendly and safe for the economy,” he said.

Many travel agencies have said that Vietnam should further relax its visa policies and simplify procedures to attract high spending tourists from Japan, North America, Northern Europe, China and South Korea. They have called for the current 15-day visa exemption extended to 30 days.

A video captures the bustling Bui Vien Street in HCMC, one of Vietnam’s most popular hangouts for foreign tourists.