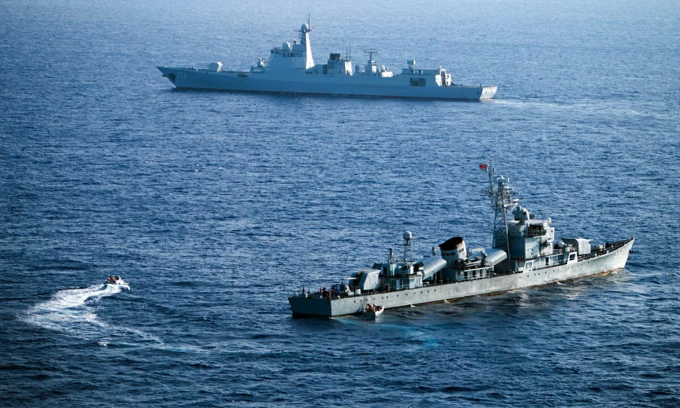 Chinese vessels during a military exercise near Vietnam’s Paracel Islands in the South China Sea, which Vietnam calls the East Sea. Photo by AFP.

General David Golfein, four-star general and current Chief of Staff of the U.S. Air Force; and General Charles Brown Jr., Commander of Pacific Air Forces and Executive Director of the Pacific Air Combat Operations, are in Hanoi on a visit on Sunday and Monday.

“More than anything, we want to respect Vietnam’s leadership and its sovereign right to defend its own territory. So anything we would do foremost is to work with the government of Vietnam and follow their lead,” said Goldfein, the first Chief of Staff of the U.S. Air Force to visit Vietnam after the Vietnam War.

He was referring to the return of Chinese oil survey vessel Haiyang Dizhi 8 and escorts to Vietnamese waters in the East Sea, internationally known as the South China Sea.

The vessel and escorts returned to Vietnam’s exclusive economic zone (EEZ) and continental shelf on August 13, less than a week after leaving on August 7. The Chinese vessels had infringed on Vietnamese sea territory for around a month in their first incursion.

Goldfein referred to last month’s statement by U.S. Secretary of State Mike Pompeo regarding the Chinese vessels entering Vietnamese waters, strongly condemning China’s infringement on Vietnam’s legitimate sovereignty, while affirming that the U.S. wants every country to have freedom of access to international waters and air spaces.

“I’d like to backup the very strong statement already made by Pompeo, when he strongly opposed operations going on right now that are challenging Vietnam’s rightful sovereignty, and its ability to operate in its waters. So our presence here is a message of commitment to accelerate our relationship,” said Goldfein.

In some cases, China’s actions affect the sovereignty and the EEZs of several countries in the South China Sea, he added.

He said U.S. leaders would discuss different options among themselves and with Vietnam and other relevant countries. The U.S. would also continue deploying aircraft and vessels to operate in areas allowed by international law.

China’s repeated infringement of Vietnamese waters was condemned by Vietnam Foreign Ministry spokeswoman Le Thi Thu Hang on Friday, as she said such actions were counterproductive to regional peace and stability.

Hang also reiterated Vietnam’s clear sovereignty and jurisdiction over the waters in accordance with the United Nations Convention on the Law of the Sea (UNCLOS).

China should withdraw all vessels from Vietnamese waters, respect its sovereignty, jurisdiction and other legal, legitimate rights and interests in accordance with the UNCLOS and international law, she said.