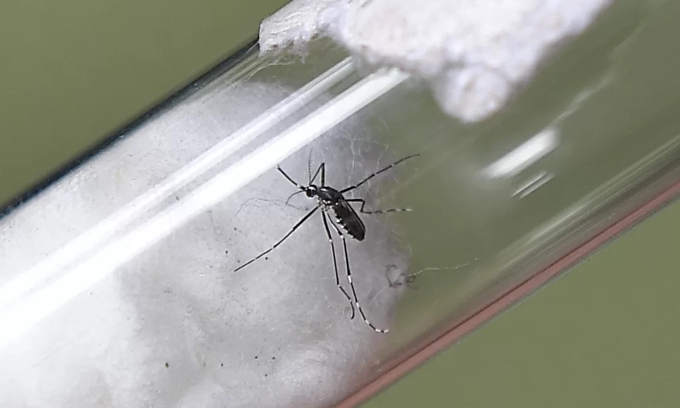 A mosquito is captured in Hanoi, August 2019. Photo by VnExpress/Ngoc Thanh.

Dengue fever diagnoses are increasingly rapidly in Vietnam and 16 deaths reported so far this year, up seven year-on-year.

Nationwide, around 130,000 cases of dengue fever have been reported in the first seven months of this year, three times higher than the same period of last year, the Health Ministry’s Preventive Medicine Department said.

The hotspots for the disease were in the central region, the Central Highlands and southern provinces.

With current weather conditions in the south and central regions, a combination of warmth and continuous rain, the virus carrying mosquitoes will have favorable conditions to breed, health officials said.

The latest victim was 36-year-old Vu Le Thu Huyen in the southern province of Dong Nai. She died last week after being hospitalized for two days.

The disease is in its peak months with ideal conditions for mosquitoes with the dengue virus to breed, said Dr Nguyen Tri Dung, director of the Ho Chi Minh City Preventive Medicine Center.

Dengue fever occurs all year round in Vietnam, but peak transmission is during the rainy season, April through October in the north, and June through December in the south.

Ho Chi Minh City, Vietnam’s southern metropolis with a population of 13 million, has reported 31,787 dengue cases in January-July, a 160 percent rise over the same period last year. Seven patients in the city have died.

Other provinces and cities with high rates of dengue fever include Da Nang, Khanh Hoa Province which is home to popular beach town Nha Trang, the southern province of Ba Ria-Vung Tau which is home to Vung Tau beach town and the industrial province Binh Duong, both bordering HCMC.

Hoang Duc Hanh, deputy director of Hanoi’s Health Department, said Hanoi has recorded 2,260 cases but no fatalities so far this year. However, with the scattered rainfall allowing mosquitoes to breed, the number of patients could increase rapidly in the coming weeks and months.

Vietnam has been trying to find an effective way to tackle dengue, one of the biggest killers out of 28 common infectious diseases. The only vaccine for it available globally is not recommended for people who have not had dengue before.

The World Health Organization says vector control is the key strategy to prevent transmission of the dengue virus.

Health authorities advise people with similar symptoms to get hospitalized as soon as possible.

Some of the preventive measures include spraying places where mosquitoes breed, keeping the living environment clean, using mosquito-repellent and wearing long-sleeved shirts and long pants.