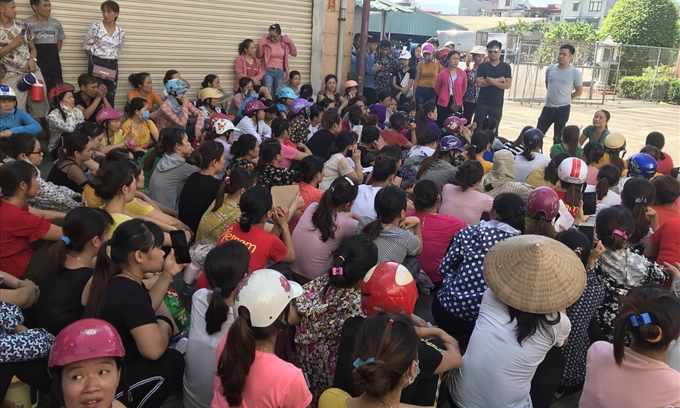 Over 2,500 workers of a Taiwanese company in the northern city of Hai Phong have been abandoned by their boss who has fled the country.

They arrived at the footwear company Kai Yang in Kien An District at 7 a.m. on Monday to work as usual, but were shocked to see that the factories had been sealed by a local bank.

All doors to the factories were locked because the assets inside had been mortgaged.

The Taiwanese boss Huang Shang Che and his 17 Taiwanese assistants had left the country without notice, according to a report from Hai Phong administration.

The workers said they haven’t received their July salary. Local authorities said the company has also failed to make social insurance payments for the workers since early this year.

How much the company owes its employees in total has not yet been estimated.

As late as Sunday, the workers had been mobilized to work overtime, but were given no inkling that the company would be shut down.

Local authorities have announced that representatives of the Taiwanese parent company would arrive in Vietnam Thursday to discuss salary payment and maintaining jobs for the workers.

The workers said their basic monthly salary was VND3.74 million ($161).

They also complained that they received meager bonuses and were not given the contracted vacation time or working conditions.

The Kai Yang Company began operations in 2005. It specializes in making footwear for exports. Earlier in April 2016, hundreds of its employees struck work, demanding better benefits.

Vietnam has delayed passing a law on demonstrations multiple times, so all protests held by workers amount to what are known as wildcat strikes.

A recent report by the Ministry of Labor, Invalid and Social Affairs has noted there were 67 strikes in the first half of this year, one less than in the same period last year, mostly demanding better pay and food.

82 percent of workers’ strikes in January-June happened in foreign invested companies. South Korean and Taiwanese companies accounted for 16 strikes each, Chinese firms for 10 and Japanese companies for four.

Vietnam’s GDP growth topped 7.08 percent last year, the highest rate since 2008, but not all of its workers are benefiting, reports have pointed out.

The Vietnam General Confederation of Labor last year published a study on minimum wages and cost of living after polling over 3,000 workers in 150 different businesses.