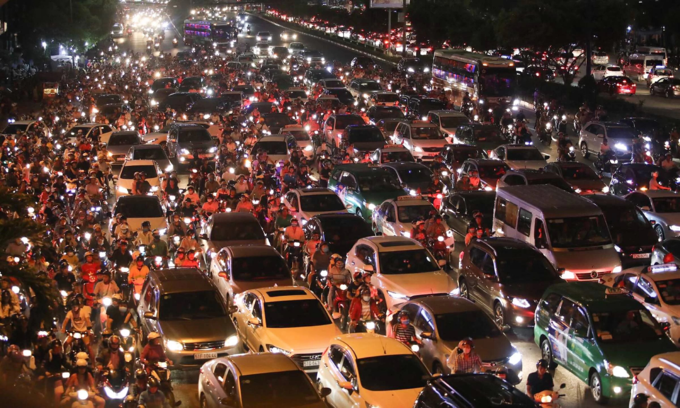 Vehicles are stuck on a road leading to the Ho Chi Minh City center on the night of April 30, 2019. Photo by VnExpress/Huu Khoa.

2021 would be the earliest that cars in Ho Chi Minh City will have to pay downtown toll, the city’s Transport Department said Wednesday.

And this will happen only if major traffic infrastructures, including the city’s first metro line, a 64-km ring road, and a 29-km Bus Rapid Transit route, are completed by then, said Tran Quang Lam, director of the department.

Lam said at an meeting Wednesday that some people have misunderstood that the city is already carrying out the project to collect toll for downtown areas. “The project is currently just a proposal that needs more research.”

When the city agrees to fund the project, his department will carry out a feasibility study and add it to the list of projects needing approval from the city administration.

If the city allows the project to go through, the appointed investor will open bids to select a competent consultant to carry out surveys and a feasibility report that includes toll rates, supporting policies for citizens affected by the gates, traffic simulation, and so on.

For now, the city envisages spending VND250 billion ($10.7 million) on erecting 34 toll gates in Districts 1, 3 and the borders of District 5 and 10. They would restrict access to the city center and certain major roads which frequently suffer traffic jams, the department says in its proposal.

The gates would only collect fees for cars entering the city center, not going out. Motorbikes will not be charged. The toll fees would go to the city budget, according to the proposal, which is set to be reviewed by the city’s Department of Planning and Investment.

“It is expected that by 2021, Ring Road 2, metro line 1 and BRT Line 1 are put into operation, large traffic constructions are completed, and public transportation is developed… that’s when we can operate the toll gate project to collect fees from cars entering city downtown areas,” Lam said.

The Ring Road 2 will connect Districts 2, 7, 8, 9, 12, Binh Tan, Thu Duc, Hoc Mon and Binh Chanh. It will help ease chronic traffic congestion in the downtown area by accommodating container trucks, preventing them from running through inner-city areas. The project is expected to be completed by 2020.

Metro line 1 from Ben Thanh in the city center to Suoi Tien to the east of the city, on the other hand, has faced many difficulties since the work started in August 2012. Only 62 percent was completed by the end of last year. Ho Chi Minh City wants its first metro line’s trial run to take place by October next year.

The route runs 20 kilometers (12.43 miles) through Districts of 1, 2, 9, Binh Thanh, and Thu Duc, and Di An District in the neighboring province of Binh Duong.

The city’s first BRT 1 route, along Vo Van Kiet – Mai Chi Tho boulevards between the Districts 1 and 2, is a $144 million project that is also expected to be completed next year.

Lam said cars were the most inefficient vehicle on the streets in terms of space occupied and people carried.

He said that the number of cars in HCMC streets took up 8.5 times the road surface as the number of buses, while the corresponding figure for motorbikes was five-fold that of buses. The people carrying capacity of both buses and motorbikes were the same at 14,000 per hour, and that of cars a paltry 2,000. Thus, cars were occupying inordinate amounts of road surface space while having the poorest people-carrying capacity, he said.

“It is difficult to answer the question of when HCMC will be free of traffic jams. It is not possible to expect that a single solution like the toll gates for cars will do the job. We think that if 10 percent of car owners switched to public transportation, it would reduce congestion a lot, “said Lam.

This isn’t the first time HCMC authorities have requested toll gates for cars entering the city center. In 2010, the city’s People’s Committee has accepted a proposal by the Innovative Technology Development Corporation to build similar toll gates. The plan was scrapped two years later because of opposition from experts and the general public.

Earlier this year, a proposal drafted by the Ministry of Transport’s Transport Development and Strategy Institute asked the city to restrict and eventually ban motorbikes from a number of downtown areas from 2025.

But legal and transportation experts have railed against the ban, calling it “hasty” and “impossible.” The city officials later promised that motorbikes in the city would only be restricted and not banned.

HCMC, the country’s largest metropolis with 13 million people, has around 7.8 million motorbikes and about 750,000 cars, according to the city’s police department.

Car registrations in the city increased 15 percent in the first six months, while motorbikes 6 percent, according to the transport department.